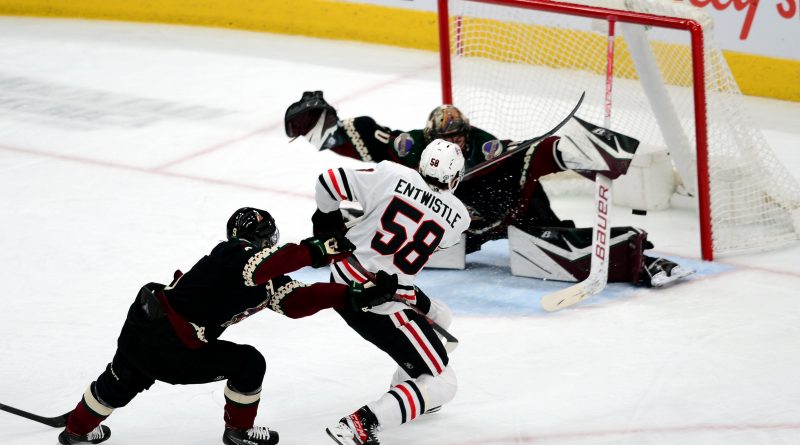 The Blackhawks visited the Arizona (for now) Coyotes in the desert on Thursday night.

And they absolutely took it to the Blackhawks.

First, let’s be real: we have no clue what NHL officials define as a “high stick” because what they were — and weren’t — calling in this game (and other recent games) is clear as mud. But blaming the officials exclusively is too easy. The Blackhawks had to win this game. The Coyotes are terrible and Chicago desperately needed two points.

And the Hawks got their asses kicked.

Oh, and the Blackhawks had the only two power plays of the first period. And were down two scores when the frame ended.

While we’re pointing out the list of WTF issues with the first period, let’s take a step back and look at the roster Derek King put on the ice. He dressed seven defensemen and 11 forwards on Thursday night. Nicolas Beaudin was elevated from the taxi squad and dressed for the game.

However, Beaudin did not get a single shift in the first period.

The second period started well for Chicago. Kirby Dach scored a highlight reel goal to cut the lead in half 61 seconds into the period.

And then MacKenzie Entwistle tied the game at 5:24 into the second.

So that’s good, right? Things were coming back to normal. The terrible team was going to lose again and the Blackhawks would finally win their first game of the new calendar year. Right?

Nope. This is when the wheels totally came off and the broadcast spent more time focused on the garbage officiating than the Blackhawks being bad.

Henrik Borgstom went to the box at 6:26. The Blackhawks survived the penalty.

Connor Murphy went to the box at 9:47. Arizona took the lead back nine seconds into the power play on a Travis Boyd goal.

Dach then went to the box at 12:38. Chicago survived that penalty in part because Lawson Crouse was sent off with 17 seconds left in the advantage.

Because he hadn’t had a turn in the penalty box yet, Riley Stillman took a seat 41 seconds after the Crouse penalty ended. The Blackhawks killed that penalty, but spent almost eight minutes of the second period down a man.

How bad are the Coyotes? They spent 40 percent of the period on the power play and were still out-shot 12-10 in the period. But they took a 3-2 lead to the third period.

After 40 minutes of hockey, Beaudin had taken one shift that lasted 40 seconds.

Borrowing from the iconic “Slam” by Onyx, bu bu but wait it gets worse!

The Blackhawks went back on penalty kill duty immediately following the Keller goal because King challenged that Marc-André Fleury was interfered with on the play. Video review failed to see what King did and Chicago was short-handed. And, of course, the Coyotes scored a second power play goal. This one from Johan Larsson.

The Arizona Coyotes, who came in averaging two goals per game, had a three-goal lead in the third period. They had two power play goals. And five for the night.

Chicago didn’t just roll over… though there were moments when you wondered if they wanted to be there at all. Jonathan Toews redirected a Jake McCabe shot into the net to get the Hawks back within two.

Then the whistles started going the Hawks’ way. Chicago got back-to-back power plays and finally got one to click. Alex DeBrincat unloaded and got the Hawks back to within one.

So here we were, watching a game that was blackout drunk. This wasn’t good hockey. It was two bad teams doing everything they could to lose a game and the other side being too polite to let it look easy. With six minutes left in regulation two bad teams had combined to score nine goals.

Unfortunately, Larsson completed his hat trick into the empty net with 28.8 seconds left in regulation and the Coyotes took a 6-4 lead to the house.

Dach won two of 12 faceoffs against the Arizona Coyotes. King kept sending him out there; he led Chicago forwards in ice time. But we can’t keep saying “he needs to be better at the dot” any more. Either he figures something out or move him to wing and give someone else some run.

Speaking of which, Dylan Strome won 10 of 15 and had an assist. The kid’s playing hard when they give him a chance.

Toews won 14 of 21 at the dot and had a goal and an assist. He competed his ass off.

Seth Jones led all Blackhawks with seven shots on net in more than 26 minutes of ice time.

Beaudin got two shifts and 1:11 on the ice, which begs the question why the hell they dressed him. Can they not adjust their game plan late and find a way to include a player? Or would they rather play down a man and look bad against the worst team in the NHL? Because that’s what happened, and Beaudin isn’t getting any “valuable experience” watching from that close to the ice.

The Blackhawks are really, really bad right now. We’ll see how long it takes for Kyle Davidson to start selling veterans to make room for the kids who were supposed to be part of the alleged rebuild to get on the NHL ice.