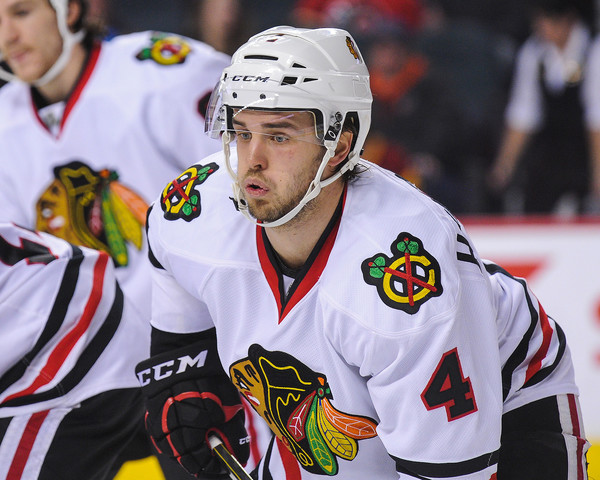 News broke hours before the 2017 NHL Draft began at the United Center that the Blackhawks had traded Niklas Hjalmarsson to Arizona.

For many, Hjalmarsson being dealt wasn’t a shocking turn of events. His contract (two remaining years with a $4.1M cap hit) was one of the great values in the NHL over the past couple years, and he will easily become a top-pair defenseman for the Coyotes. But the Hawks facing cap issues forced tough decisions, and Hjalmarsson became the best bet to move in a deal bringing back good return.

Friday was a busy day for the Hawks, however, and fans mourning the loss of Hjalmarsson only had about a half hour to digest the news of his departure before a more shocking trade – Artemi Panarin for Brandon Saad – was announced. The dust had barely settled from those two trades when the draft began.

Now, with the weekend in the rear view mirror, we can exhale and take a step back.

How do we wrap up the legacy of Hjalmarsson in Chicago? With all of the talk about draft steals over the weekend, one of the great finds in Chicago history is Hjalmarsson. The 108th overall selection in the 2005 NHL Draft, only 13 of the previous 107 selections have played more regular season games than Hjalmarsson.

Since the beginning of the 2009-10 season, only Brent Seabrook (609) and Duncan Keith (591) have played more games in the Indian head than Hjalmarsson (589). He averaged 20:47 on the ice over that stretch; those three defensemen were the rock of the Blackhawks three championships.

Since the beginning of the 2009-10 season, Hjalmarsson and Seabrook blocked 1,155 shots each. Only four defensemen in the NHL (Dan Girardi, Francois Beauchemin, Kris Russell and Josh Gorges) blocked more shots than Chicago’s pair.

Over that stretch of time, Hjalmarsson skated 1,490 minutes of short-handed ice time, which is the 14th-highest total in the NHL and the highest on the Blackhawks.

In total, Hjalmarsson played in 623 regular season games for the Blackhawks. He scored 23 goals with 143 assists in those contests. In the postseason, Hjalmarsson appeared in 128 games with Chicago posting two goals and 26 assists.

He won three championships with the Blackhawks.

No defenseman in Chicago Blackhawks history has appeared in more postseason games than Hjalmarsson. And his 623 regular season appearances rank tenth in franchise history.

And to think the rights to the draft choice used to select Hjalmarsson were acquired in one of the more infamous trades in Blackhawks history, with Chicago sending defenseman Alexander Karpovtsev to the New York Islanders on March 9, 2004. But there’s also the matter of the offer sheet that cannot be ignored when discussing Hjalmarsson’s time with the Hawks.

In 2010, with the Blackhawks in the middle of a roster purge that felt like something out of the Old Testament to fans, the 23-year-old defenseman signed an offer sheet with the San Jose Sharks. I still remember being at the Blackhawks’ prospect camp at Johnny’s West when news broke that Hjalmarsson had signed an offer sheet, something that rarely happens in the NHL.

As Chris Kuc remembered for the Chicago Tribune last year, the deal certainly didn’t make life any easier for the Blackhawks and Hjalmarsson could have been headed to San Jose in the wake of signing. But Bowman made the right choice and opted to keep Hjalmarsson at the more expensive price point over retaining Antti Niemi. The net eventually became Corey Crawford’s residence, and the Blackhawks have won two Cups since.

When fans look back at the core of the Chicago Blackhawks’ three championship teams, certainly Toews, Kane, Keith, Seabrook and Hossa will be there. But Hjalmarsson wasn’t only along for the ride with those more widely recognized and celebrated stars. He was a crucial component of the golden age of Blackhawks hockey. 24 thoughts on “Thank You, Niklas Hjalmarsson”