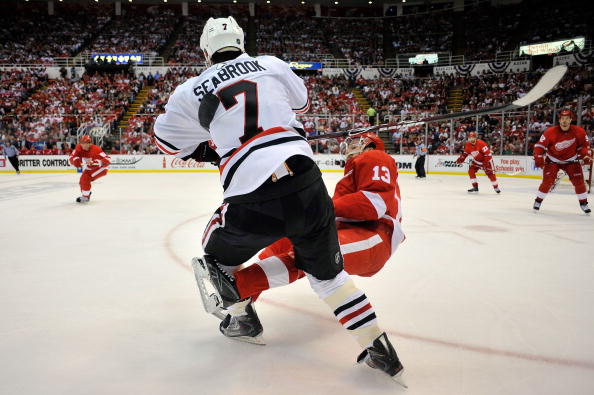 Brent Seabrook is calling it a career. Ongoing health issues have kept him from joining the Blackhawks this season and, after 15 incredible years, he’s hanging up his skates.

Seabrook will forever be one of the all-time best defensemen to wear the Indian head. He was a warrior who was critical to the resurrection of the franchise and three Stanley Cup championships.

Chicago selected Seabrook with the 14th overall pick in the legendary 2003 NHL Draft. He retires ranking fifth in the draft class in games played (1,114) behind only Eric Staal, Dustin Brown, Ryan Suter and Brent Burns. The only defenseman to appear in more games for the Chicago Blackhawks is Duncan Keith.

Between his NHL debut in 2005 and his final game in 2019, Seabrook established himself as a Hall of Fame caliber player whose resume should have him inducted in the not-too distant future.

Seabrook joined a terrible team with Keith at his side. The two young defensemen were the cornerstones of the organization’s turnaround, providing stability on the back end as the team tried build a roster that could compete.

Later that year, Seabrook was a critical part of the Blackhawks ending the franchise’s Stanley Cup drought. He had 11 points in 22 postseason games with an “A” on his chest.

The “A” he wore was fitting. Seabrook was always one of the key leaders for the Blackhawks. In 2013, his conversation with Toews as the Hawks’ captain headed to the penalty box against the Red Wings changed the trajectory of that postseason. The Blackhawks would win that series and become a dynasty.

On May 29, 2013, Seabrook ripped home one of the iconic goals in the history of the franchise.

That overtime game and series-winning goal capped an incredible series between two rivals. Seabrook was in the middle of the celebration, where he deserved to be every time this era of Blackhawks teams raised their sticks in joy.

Seabrook appeared in 123 career postseason games for the Hawks. He was one of the best postseason performers the organization has ever seen.

In the history of the Blackhawks, Seabrook’s numbers are among the best. Among all-time Chicago defensemen, Seabrook ranks:

In the history of the Blackhawks, Seabrook’s postseason resume stacks up among the greatest. Obviously the expanded playoffs have helped build a longer resume than players in previous decades could have built, but Seabrook is at/near the top of almost every playoff category as well. In the postseason, Seabrook ranks:

You’ll notice that most of the names in front of Seabrook on these lists are Hall of Famers. Pierre Pilote, Doug Wilson and Chris Chelios have already been inducted. Eventually, Keith will be as well. Seabrook should join them.

Indeed, I predict that some day Seabrook’s #7 will hang from the rafters at the United Center. Maybe he’ll share the honor with Chelios, maybe he’ll own the distinction on his own.

Over the past few years as Seabrook played through pain, fans happily complained about his impact on the salary cap. His play had diminished over the years because of the physical style of play he brought to the ice, and ultimately it was that physical toll that has ended his career.

There haven’t been many leaders in the NHL over the past 20 years to have made as significant an impact on his franchise as Seabrook did with the Chicago Blackhawks. We – the fans – have been incredibly fortunate to have him on our team.

Thank you, Brent Seabrook. You’ve been more than we could have asked for as a player, a leader and an ambassador of the organization.

31 thoughts on “Thank You, Brent Seabrook”