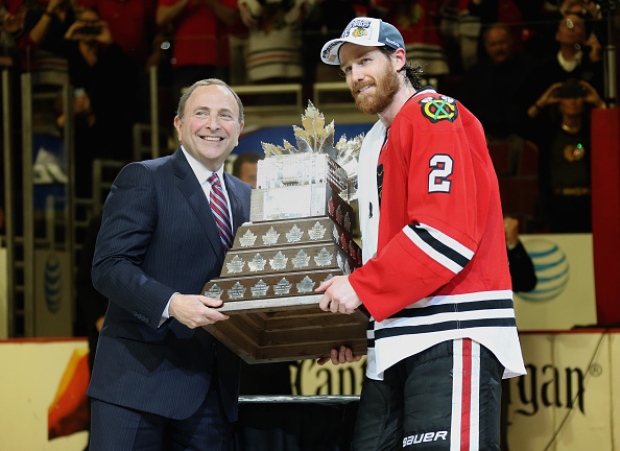 As has been our history, when a significant player on the Blackhawks gets traded we thank them for their time with the franchise.

This one isn’t easy.

Duncan Keith was the 54th player selected in the 2002 NHL Draft. The only player from that draft to appear in more NHL games in the 19 years since the draft is Jay Bouwmeester, who was the third player selected.

Keith was, with Brent Seabrook, the one of the first players to arrive at the United Center that began the turnaround of the franchise from laughing stock to dynasty. He joined the Blackhawks for the beginning of the 2005-06 season and appeared in 81 games as a rookie.

Since his debut, Keith has appeared in 1,192 games. That total ranks second in the history of the Blackhawks behind only Stan Mikita (1,396).

His 625 points rank second all-time among Blackhawks defensemen behind only Doug Wilson (779).

Keith won the Norris Trophy twice with the Blackhawks and was the winner of the Conn Smythe in 2015. The only other players to win the Norris more than once with Chicago are both in the Hall of Fame: Pierre Pilote (three) and Chris Chelios (twice). The Conn Smythe began in 1965, so only three Blackhawks have won it: Jonathan Toews, Patrick Kane and Keith.

He also represented the Blackhawks and Canada in two gold medal-winning performances (2010 and 2014).

His credentials are an easy path to the Hall of Fame when his career comes to a close.

But Keith is so much more to Blackhawks fans than his resume.

Keith played through the ugly, awful seasons before Toews and Kane arrived. Those were brutal seasons with attendance in the low thousands. When Keith and Seabrook arrived, you could hear the beer vendors from the opposite side of the arena.

He developed into one of the best defenseman of his generation. He carried the Blackhawks’ blue line into an era of dominance.

Many will remember him blocking a Patrick Marleau shot with his face in 2010. With 12:30 remaining in the second period of the series-clinching win over the Sharks, Keith was hit in the face. Seven minutes later, Keith was back on the ice missing a few teeth.

“It’s just missing teeth,” Keith said after the game. “It’s a long way from the heart.”

Heart is what Keith was for the Blackhawks. He and Seabrook became the game’s ultimate shut-down pair as the Blackhawks won their three championships. Over time, age caught up with both and they were separated as a pair. But their legacies will be tied together in the history books.

Keith’s number will never be worn by another Blackhawks player. It shouldn’t. Indeed, whomever wears the A on their jersey that will be vacated by Keith will have a heavy responsibility. He was one of the finest to ever wear the Indian head sweater.

Duncan Keith wasn’t brought in as a free agent like Marian Hossa or Brian Campbell. He wasn’t acquired in a trade like Patrick Sharp. He was drafted and developed. And, at the time that he was drafted, the Blackhawks were at the bottom of the league. He played a huge role in changing that.

Thank you, Duncan, for everything you have meant and will mean to the Chicago Blackhawks.

33 thoughts on “Thank you, Duncan Keith”