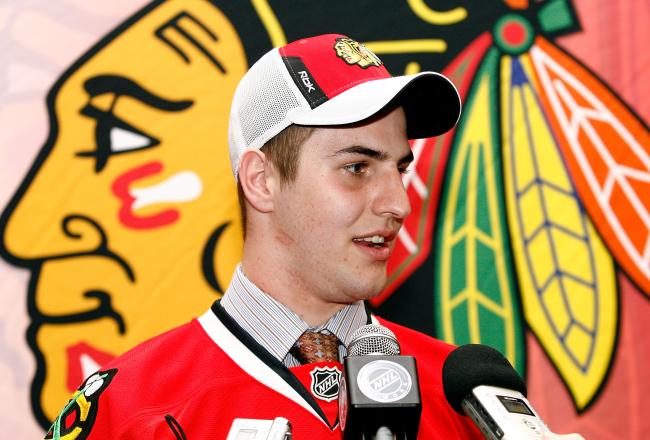 With news on Wednesday that Shawn Lalonde is headed to Germany, the Blackhawks 2008 Draft Class takes another hit. Looking back five years to that group, the Hawks nearly missed on an entire draft.

After hitting a number of home runs in the draft between 2001-2004, the Hawks wasted five years and more than 30 picks.

In the five years between 2005-09, the Blackhawks made 43 selections. Of those picks, only 11 have played in an NHL game, and only eight have played in at least 10 NHL contests. (That number should increase this year; Brandon Pirri was selected in the second round in 2009.)

In fact, each of the Blackhawks’ drafts from 2005-09 has produced only one player who has made an impact with Chicago at the NHL level:

(In saying one player has made an impact from 2008, we’re giving Smith credit for the 2011 postseason. And no, 2005’s Jack Skille never made an impact in Chicago.)

The 2008 NHL Draft has proved to be a decent class. Five years after the selections were made, a number of players from that group have emerged as prominent pieces on winning NHL rosters.

Chicago owned the 11th overall pick that year, and watched a few future stars come off the board before they were on the clock. Steven Stamkos and Drew Doughty were the first two names called, both of whom quickly developed into elite players at their positions.

Between Doughty and the 11th selection, a few other quality players were called. Zach Bogosian, Alex Pietrangelo, Luke Schenn, Nikita Filatov, Colin Wilson, Mikkel Boedker, Josh Bailey and Cody Hodgson. At the end of the 2013 season, only Filatov and Hodgson had played fewer than 200 regular season games from these first 10 picks, while four have played more than 300 career games already.

With the 11th overall selection, the Blackhawks selected Kyle Beach.

Chicago did not have a second round pick in the 2008 Draft; it was part of the three-team deal that brought the rights to then-restricted free agent forward Martin Havlat to the Hawks.

The second round in 2008 may have lacked a Chicago selection, but some good names came off the board. Jacob Markstom, Slava Voynov, Roman Josi, Justin Schultz, Derek Stepan and Travis Harmonic are a few of the players that were picked in that second round. Toronto selected Jimmy Hayes with the 60th overall selection; he was traded to the Blackhawks two years later after his younger brother, Kevin, was selected in the first round of the 2010 Draft.

By the time the Hawks were back on the clock with the 68th overall selection, a lot of talent had come off the board. And only two selections before Chicago’s pick, the New York Islanders called David Toews (younger brother of Jonathan).

With their second pick of the draft (68th overall in the third round), the Hawks called Shawn Lalonde.

He has played in one NHL game.

After Lalonde, a couple future NHL regulars were selected in the third round. Ottawa picked Zack Smith at 79, and New Jersey used the 82nd overall selection on Adam Henrique.

The Blackhawks did not have a pick again in the fourth round, and watched as Braden Holtby and Gustav Nyqvist came off the board.

More picks from the fifth round of the 2008 Draft (five) have played more than 50 NHL games than from that year’s fourth round (four). Andrei Loktionov and Matt Calvert were off the board by the time the Hawks were back on the clock at pick number 132.

With their third pick in the 2008 Draft (132nd overall), the Blackhawks selected Tiegan Zhan.

Following Zhan off the board in the fifth round were Matt Martin and Philip Larsen.

The Blackhawks had three picks in the sixth round in 2008, but watched as Jared Spurgeon and Cam Atkinson were called before the first of the three.

With the 162nd overall pick, the Blackhawks selected Jonathan Carlsson.

With the 169th overall pick, the Blackhawks selected Ben Smith. Smith has played in 20 regular season NHL games, but should be on the roster on Opening Night this season.

And, with the 179th overall pick (just after Zac Rinaldo), the Blackhawks selected Braden Birch.

He, too, has yet to play in an NHL game.

In the seventh round, with the 192nd overall pick, the Blackhawks selected Joe Gleason.

Not surprisingly, Gleason hasn’t played in the NHL yet either.

A couple notable names from the seventh round in 2008 were Jason Demers and Anders Lindback.

Five years after the 2008 Draft, the seven players selected by the Chicago Blackhawks have combined to play in 21 regular season NHL games – and 20 of those are from Smith.

The best move Chicago made with picks from that year’s draft was using the second round pick two years prior in the trade to acquire Havlat; 2008 wasn’t an overwhelming draft after the top few picks, but there was good depth throughout the seven rounds.

From 2005-09, the Blackhawks missed on most of their draft picks. With news that Lalonde is leaving for Germany, the 2008 Draft appears to have been one of their worst.