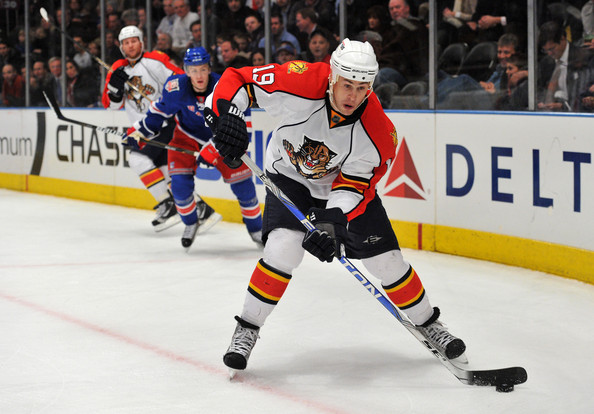 Would you want that on these Chicago Blackhawks right now?

From Dustin Byfuglien to Brent Sopel, a case has probably been made for the Blackhawks to bring back every player removed from last year’s team (except Cristobal Huet).

But as February gets rolling and the trade deadline creeps closer, the player GM Stan Bowman should bring back is a guy that never wore a Blackhawks sweater.

The well known reports now are that the Blackhawks are looking to add another center and/or add depth on their blue line. It now appears that the player that “got away” from Bowman was barely ever here.

In the trade that sent Byfuglien, Sopel and Ben Eager to Atlanta, the centerpiece from the Hawks perspective was top prospect Jeremy Morin. However, lost in the shuffle was veteran center Marty Reasoner, who was dealt to Florida for Jeff Taffe less than a month after being acquired. The resume that opened this piece is the stat line for Reasoner this year. Could the Reasoner deal be the biggest mistake of Bowman’s summer?

Reasoner, 33, was a cap casualty that didn’t need to be. Rather than adding John Scott or bringing back Nick Boynton, or subsequently adding Ryan Johnson, it now appears the Blackhawks could have easily kept Reasoner on their NHL roster for the season.

Meanwhile, Taffe has had a very good year – in Rockford.

When Bowman looks back at the players that were dealt out of Chicago last summer, and the one’s he might want back, it might be Reasoner that tops the list.

4 thoughts on “The Biggest Mistake of Stan Bowman’s Summer”