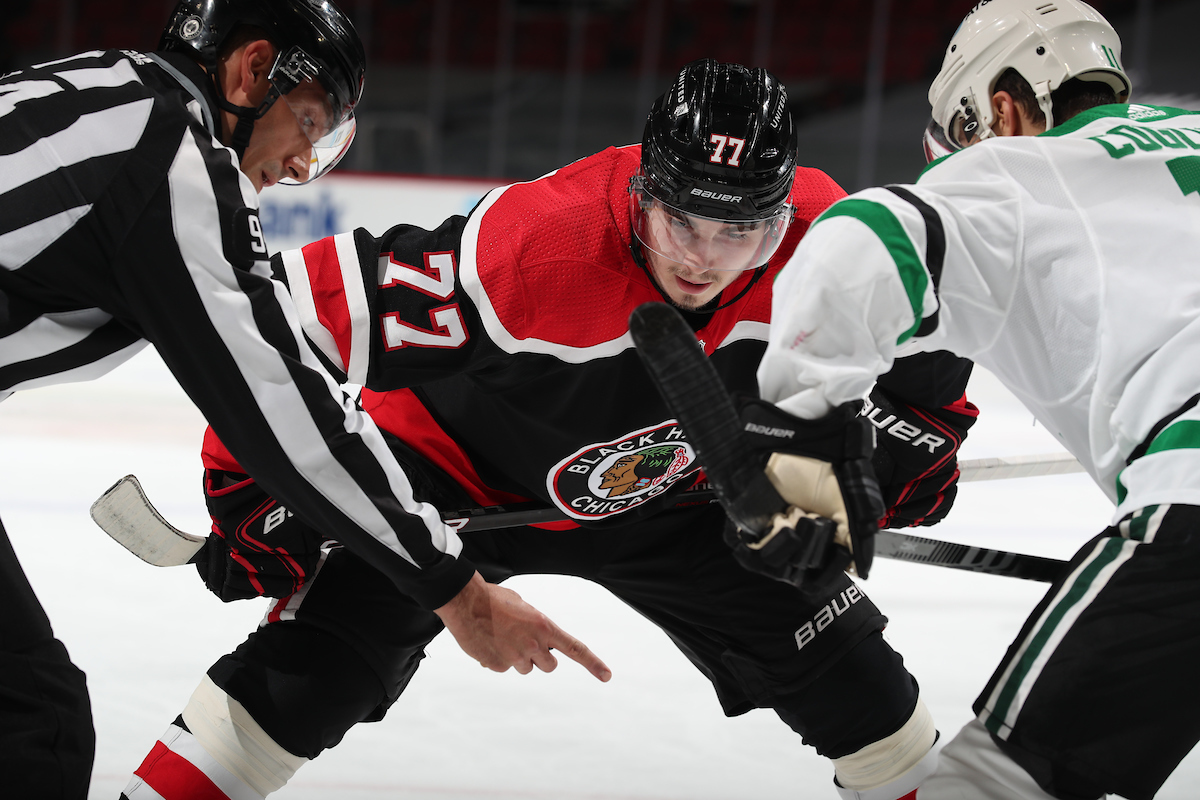 Since the coaching change, the Blackhawks have been a different team. Obviously four straight wins — without trailing for a single second — points to a significant improvement on the ice. Many aspects of the team’s play have been much better since Derek King was installed as the head coach.

But there’s still one glaring issue that complicates other aspects that need to improve.

The Blackhawks suck at the dot.

Through last night’s game, Jonathan Toews has taken 326 faceoffs. Kirby Dach ranks second on the team with 150 total draws taken. And Dylan Strome, who has played in only nine of the team’s 16 games, ranks third.

The Hawks are relying too heavily on Toews again. But that’s a problem that comes from necessity; nobody on the roster is good at it other than him.

Dach has shown great strides in every part of his game other than faceoffs. We see flashes every night of the potential that many believe will make him a superstar in the league soon. And that play is why he’s centering the line with Patrick Kane and Alex DeBrincat — one of the most envious spots in the entire NHL. He has two legit scorers on his line and both are producing at an all-star level.

Unfortunately, Dach hasn’t been good in the faceoff circle. To be honest, he’s been terrible.

Dach has won only 30 percent of his faceoffs this season. He’s winning only 28.8 percent at even-strength and 20 percent on the power play. Those are ugly numbers that one might expect from a wing who occasionally has to step into the circle, not from a team’s top-line center.

For a team that is desperately trying to generate offense, having a center on the line with Kane and DeBrincat who consistently loses faceoffs means they’re chasing the puck to get possession before they can turn on the offense.

Some have considered moving Dach off the dot. A move to the wing wouldn’t be a career-ender for Dach; he’s still a terrific player whose strengths in every aspect of the game other than faceoffs benefit the team and his linemates. But, if the Hawks want to control the puck, his continued struggles aren’t helping.

So the question becomes what to do at center if the Blackhawks want to control the puck more frequently.

If we take a step back from all of the money the Blackhawks spent in the offseason (thanks, Stan) and the reality that the Hawks went for it this year (except for the head coach who started the season), the reality is that the organization should still be in a building mindset.

Chicago is not rebuilding any more because they signed Seth Jones and others to multi-year deals that imply the Hawks want to win sooner than later. But they should still be building — developing prospects to improve the roster around the guys who are the next generation (Dach, DeBrincat, Jones, etc).

With that in mind, allowing Dach to continue working on his game and allowing him to struggle with the mindset that it’s a long play, committing to him as a center who is still only 20 years old may be the smart move. Not every center comes into the league and wins faceoffs the way Toews has for so much of his Hall of Fame career. It’s possible that, with time and more reps, Dach improves.

But we need to see steps in a positive direction. And, right now, Dach isn’t showing improvement at the dot. And his inability to win faceoffs hurts the team’s offense.

If they want to win now

An obvious answer would be to move Toews, who is winning 59.5 percent of his faceoffs, to the spot between Kane and DeBrincat. But that loads up one line and puts question marks everywhere else on the roster.

Let’s play it forward, though. If the Blackhawks did move Toews onto a line with Kane and DeBrincat and bumped Dach to the wing, what would that do to the center position on the depth chart?

Strome doesn’t have a strong history in the faceoff circle, but he’s been surprisingly effective this season. Yes, it’s been limited because of missed games (thanks, Jeremy) and he’s averaging less than seven faceoffs per game, but Strome is winning 55 percent of his faceoffs for the season and 55 percent at even-strength. The area where he needed to improve has seen him do a very nice job when he’s had the chance this season. And it might be time for him to get more opportunities.

Beyond Strome, the Blackhawks don’t have a lot to be excited about in the circle. Henrik Borgstrom, who has missed time as well, has won 41.5 percent of his faceoffs thus far. Philipp Kurashev has won 42.6 percent of his chances. Reese Johnson is at 47.8 percent, which is the highest of the young options for the Blackhawks. Ryan Carpenter, who has historically been around 50 percent, has won only 45 percent thus far.

So what could/should the Blackhawks do for lines to maximize their limited ability to win faceoffs? Here’s a thought:

Once Hagel, Mackenzie Entwistle and Tyler Johnson are healthy, the Blackhawks will have to send a couple bodies back to Rockford. Mike Hardman might be on his way out once Hagel is ready, which could be during the road trip.

Kubalik and Kurashev have spent time on a line before. Putting them back together could help their individual play, and having Borgstrom between them could make that at least an intriguing line.

Khiara has actually won 54.6 percent of his faceoffs this season, albeit in limited opportunities. He has been on Toews’ line for most of the season, but bumping Toews up to the top line would obviously mean he needs a new home on the roster. Putting him on the fourth line with Carpenter and either Johnson would be a strong bottom line.

What are your thoughts? Should the Blackhawks leave Dach at center and let him work through his struggles or should they move him to the wing?

33 thoughts on “The Blackhawks Have A Problem”