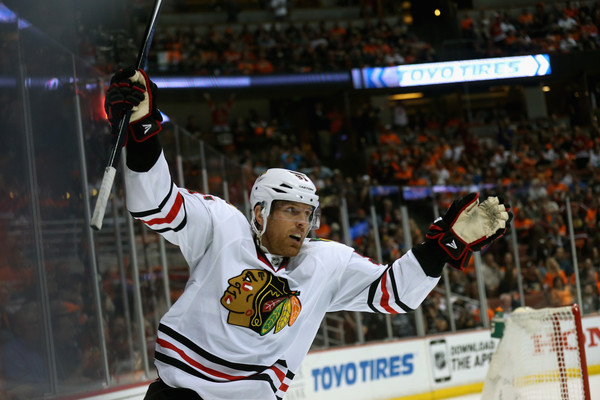 On June 20, 2014, the New York Rangers rid themselves of an underachieving veteran who was, in the eyes of many New Yorkers, killing their chances of winning a Stanley Cup. Brad Richards received a compliance buyout from the Rangers with six years remaining on the nine-year, $60M million contract he originally signed in 2011.

New York fans had reasons for their want for more from the star center. Richards posted 46 goals and 151 points in 210 over three regular seasons in New York. And in the playoffs, in spite of his relationship with former Rangers coach John Tortorella, Richards found himself in the doghouse frequently. He registered only 28 points in 55 Stanley Cup Playoff games as a member of the Rangers, and was a healthy scratch for the last two games of the 2013 playoffs.

That relationship with Tortorella started in Tampa, where Richards will return this week as the enemy.

In 2004, with Tortorella behind the bench, Richards set a record with seven game-winning goals in a single postseason on his way to winning the Conn Smythe. He also won the Lady Byng that season. Richards time in Tampa ended on Feb. 26, 2008, when the Lightning traded him to Dallas (with Johan Holmqvist) for Jeff Halpern, Mike Smith, Jussi Jokinen and fourth round pick in the 2009 draft.

The regular season treated Richards well in Dallas, where he put up 227 points in 220 games. Unfortunately, he only appeared in one postseason with the Stars, in 2008 after he was acquired via trade. Dallas advanced to the Western Conference Final that season, led by Richards’ 15 points in 18 games (only Mike Ribiero had more points in that postseason for the Stars). Detroit would eliminate Dallas in six games in those conference finals, however, and Richards wouldn’t play another postseason game in a Stars sweater.

Richards was the big prize in 2011 free agency, and the Rangers felt they had found the missing piece to their championship puzzle. But the up-and-down tenure of Tortorella failed to produce a champion and one season of Alain Vigneault produced a trip to the Cup Final – that lasted only five games.

On the first day of free agency in 2014, Richards was a 34-year-old facing questions about his future. He could have looked for a multi-year deal, but opted to sign a one-year contract for only $2M with the Blackhawks.

To say the 2014-15 season was a glorious success for Richards wouldn’t be completely accurate. Chicago had hoped he would come in and cement the center position on their second line after posting 51 points with the Rangers last season, but Richards saw his production slip to the worst full regular season numbers of his career (12 goals, 25 assists in 76 games). He averaged 14:53 on the ice per night and won 48.4 percent of his faceoffs this year with the Blackhawks.

But in these playoffs, unlike his time in New York, Richards has been worth every penny of the bargain contract he signed on the first of July.

Heading back to Tampa, where he reached the peak of his career 11 years ago, Richards comes in playing his best hockey of the year. Thanks to the multiple overtime games, Richards is averaging 17:29 per night and has 11 points in 17 games, good for fifth among Blackhawks forwards.

Richards was an undeniable key to the Hawks getting past the Ducks in the Western Conference Final. He posted seven points in the series, and registered a point in six of the seven games; he finished with two helpers in the series finale.

With some of the game’s elite scorers coming into this Cup Final, depth players will be a key for whomever wants to come away with the game’s ultimate prize. Richards excelling in a supporting role may, ironically, bring him back to the heights he enjoyed in a Lightning sweater as the key to Tampa’s offense more than a decade ago.

17 thoughts on “The Rebirth – And Return – Of Brad Richards”