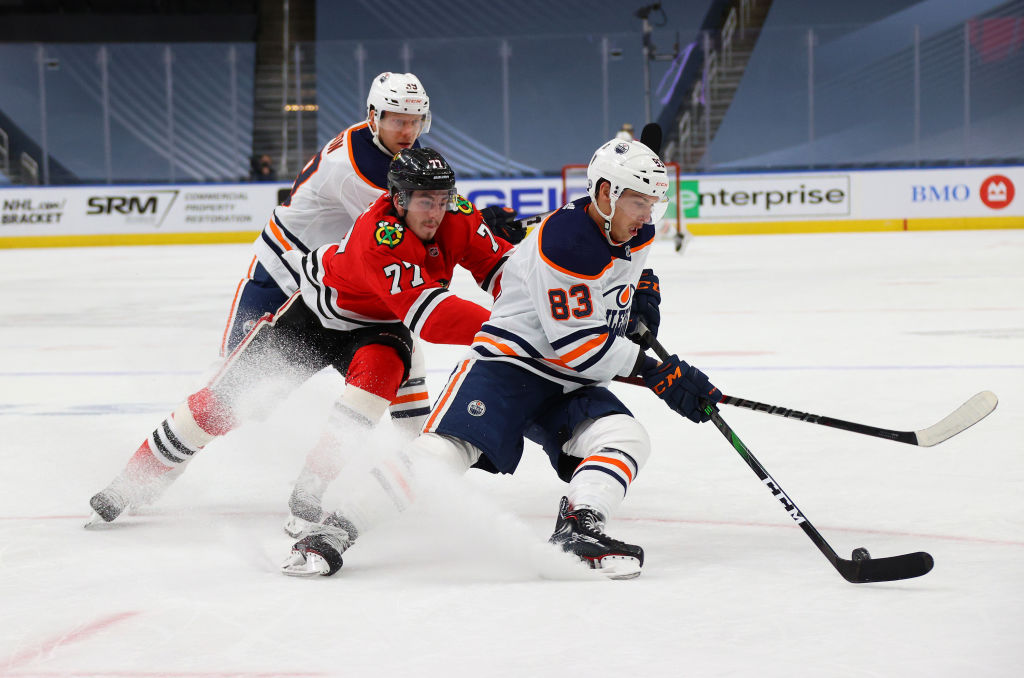 After two high-scoring games, the Blackhawks took over control of… the Oilers’ dressing room in Edmonton. Wearing red as the “home” team in Game 3 of the qualifying series, Chicago looked to benefit from having the last change against the high-powered Oilers offense.

The two teams spent the first half of the first period feeling each other out. Olli Maatta got Chicago on the board first at 9:14 into the game.

Matthew Highmore and Patrick Kane picked up the helpers on the Maatta goal.

Leon Draisaitl tied the game less than 30 seconds later, however.

After the Draisaitl goal, a parade began to the penalty box. Josh Archibald went to the box first, but Dominik Kubalik ended Chicago’s advantage 16 seconds later.

Edmonton had two men in the box in the final minute of the period and Jonathan Toews gave the Hawks a 2-1 lead with five seconds left in the first.

With an assist on the Toews goal, Kirby Dach made history.

Corey Crawford was good enough in the first period, but the line to get into the penalty box had only just begun.

Seven penalties were called in the second period – three on the Oilers and four on the Blackhawks.

Draisaitl scored the tying goal for Edmonton at even strength, Matthew Highmore turned the puck over and, of course, it found Draisaitl on the doorstep.

Then Connor McDavid (surprise!) scored a power play goal with eight seconds left the second period to tie the game.

With 3:15 left in the second, Dach plowed into Tyler Ennis. The Oilers forward collapsed to the ice with an apparently ugly leg injury. He did not return.

After 40 minutes, the Oilers held a 20-17 shot advantage and a one-goal lead as the “visitors.” Chicago was 1-6 on the power play after two.

Chicago kept skating and chipping away, and Crawford did a good job keeping his team in the game. There were only three faceoffs in the first half of the third period and neither team sent a player to the box.

It took 14 minutes, but the Blackhawks were able to find the equalizer. Highmore was credited with the game-tying goal.

Highmore’s first career postseason goal made up for his turnover in the second period and gave Chicago some momentum. Slater Koekkoek and Maatta were credited with the assists on the tying marker.

In the final 90 seconds, Toews won a faceoff and then raced to the front of the net. Connor Murphy unloaded a shot that got a piece of Toews’ stick and into the back of the net. Suddenly, with 1:16 left in regulation, the Blackhawks were up one.

The Hawks withstood the pressure of the Oilers in the final minute and Crawford made a couple final saves to finish the deal. Chicago escaped with a 4-3 win and will play to eliminate the Oilers on Friday evening.

Crawford stopped 25 of 28 in the victory. The Blackhawks in front of him hit the post five times in the game, including one glorious opportunity for Toews.

Most playoff wins by active goalies…

Toews had another terrific game in spite of the post shot. He won 17 of 29 faceoffs and put three shots on net in 21:16. His performance moved him up the record books for Chicago’s Original Six franchise as well.

On the same night he has tied Denis Savard for the 2nd most career playoff games (131) in @NHLBlackhawks history, Jonathan Toews has also passed Stan Mikita & Steve Larmer for the 3rd most PP goals (19) + passed Patrick Sharp for the 6th most total goals (43) in Hawks PO history pic.twitter.com/lZksT8F9sy

Maatta had one goal and one assist in 13:11. After getting beat by Draisaitl for a goal he made a big impact late. He was credited with two blocked shots and one hit.

The Blackhawks forward leader in ice time was Dach (23:21), who continues to show a maturation on the ice. He was credited with one assist, two hits and one blocked shot in the game. Dach also became the first Blackhawks rookie to score a point in his first three playoff games since Eddie Olczyk in 1985.

Edmonton had two defensemen – Caleb Jones and Matthew Benning – held under 10 minutes of ice time. And yet Benning (one assist) was the only Oilers defenseman with a point in the game. Chicago, on the other hand, got five points from the blue line.

Oscar Klefbom led the Oilers in ice time with 27:49.

McDavid skated 21:07 with one goal and won eight of only 13 faceoffs. Draisaitl led Edmonton forwards in ice time (24:25) and had three points while winning 12 of 25 faceoffs. Draisaitl and Ryan Nugent-Hopkins finished tied for the Oilers’ lead with six shots on net.

Zack Kassian only skated 6:20. Ennis, who left because of the injury, was limited to 6:12.

Jonathan Toews recorded his ninth career multi-goal game in the playoffs. Only Bobby Hull (14) and Denis Savard (10) have more with the @NHLBlackhawks franchise. #NHLStats #StanleyCup pic.twitter.com/sy0fmTJgaw