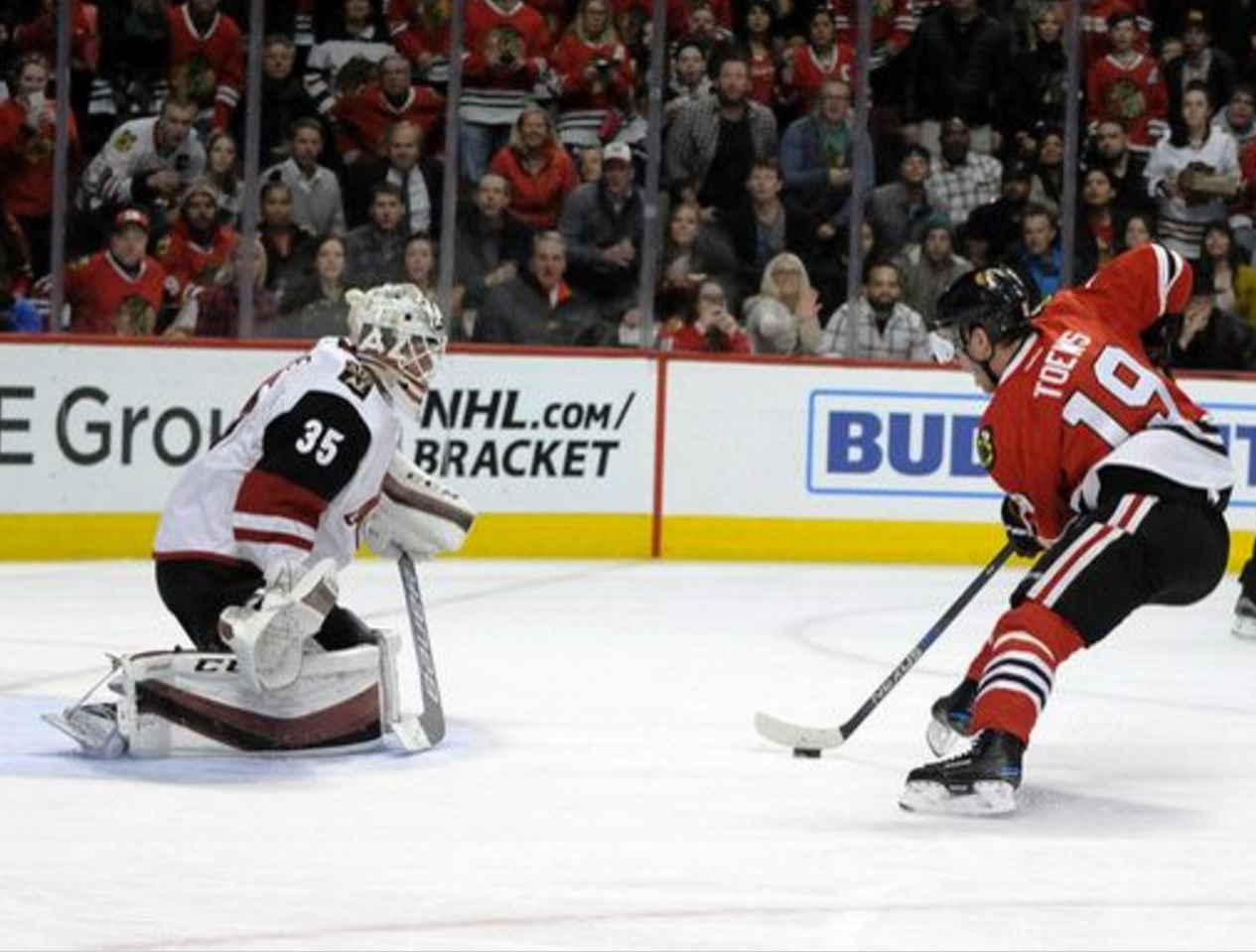 The Blackhawks took advantage of a bad Arizona team at the United Center on Tuesday night, hanging another big offensive performance on a struggling visitor.

Richard Panik returned to the lineup in place of injured Marian Hossa  and scored his sixth goal of the season at 5:16 into the first. He hasn’t played every night, but it’s easy to say now that the Hawks won the trade bringing him to Chicago in exchange for Jeremy Morin by a wide margin.

While successfully killing their second penalty of the opening period, Jonathan Toews played 12 strong seconds to eliminate a brief two-man advantage for the Coyotes and then exploded up the ice for a short-handed breakaway.

It was the fourth short-handed of the year for Chicago’s captain and the 250th regular season goal of his remarkable career (so far).

Both teams were credited with seven shots on net in the first period.

The wheels came flying off for Arizona in the second.

Chicago scored three power play goals – and Artemi Panarin had an assist on all three of them – as the Hawks sprinted to a five goal lead. Unfortunately, two of the goals came on a major penalty that saw Artem Animov head to the Hawks’ dressing room and Antoine Vermette head to the showers.

Anisimov was driven into the boards by Vermette while the Hawks’ forward was stopping. Vermette received a major penalty for boarding and a game misconduct, and the Blackhawks scored twice during the major penalty.

Patrick Kane, Trevor van Riemsdyk and Andrew Ladd were credited with the three power play goals for the Blackhawks in a second period that saw Chicago out-shoot Arizona 16-6.

Anisimov did not return for the third period.

In the third, Arizona scored twice and Andrew Desjardins added a sixth for the Hawks to drive the final score to 6-2.

Toews and Panarin each had a three-point night, and in the blowout coach Joel Quenneville was able to spread out the ice time. Toews only took ten faceoffs (he won seven) and skated just 16:25 in the victory. Teuvo Teravainen saw the most action at the dot, moving up to replace Anisimov on the second line. He struggled at the dot, however, winning just three of 13 draws.

The three-point night for Panarin made some more Blackhawks history.

Even with Quenneville distributing shifts across the lineup, Brandon Mashinter only skated 7:09.

Chicago scored three power play goals on six total advantages in the game, and successfully killed six Arizona power plays. The Coyotes out-shot the Hawks 18-9 in the third period, a function of the Hawks being up by a significant margin and Arizona getting three power plays in the period.

Scott Darling made 29 saves against 31 shots to earn the win.