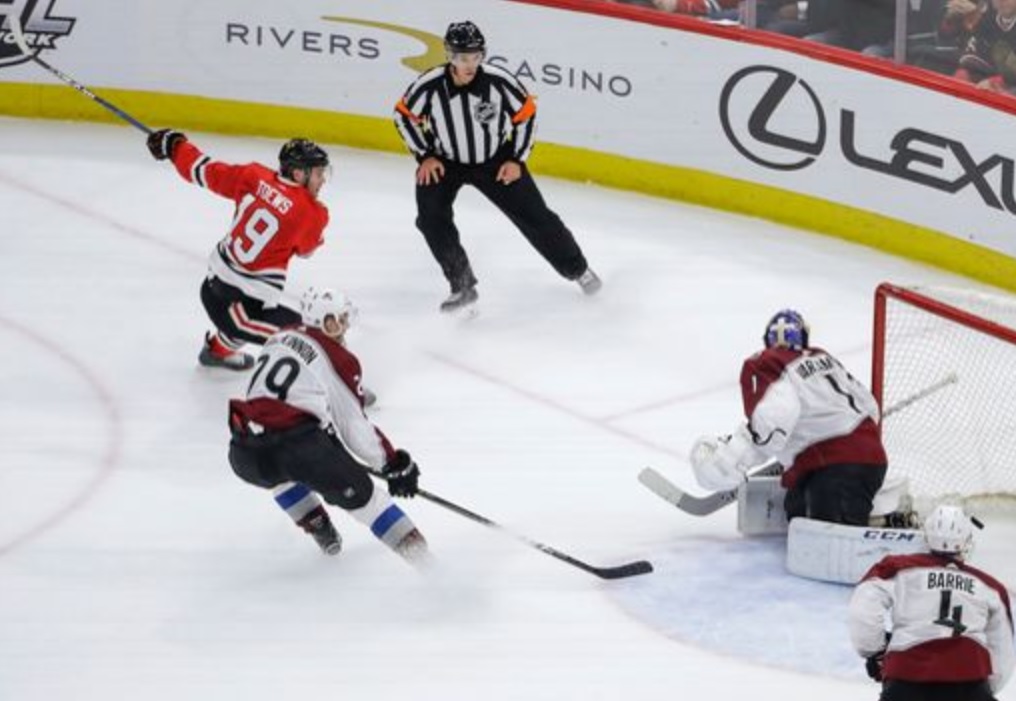 It took 9 seconds for 19 to get the Blackhawks a second point on Tuesday night.

But it took a terrific effort from JF Berube for 60 minutes to get the Blackhawks there.

Berube stopped 33 of 34 and the Blackhawks overcame an overturned go-ahead goal to beat the Avalanche in front of their home fans.

Erik Gustafsson, who inked a two-year extension earlier in the day, provided the offense in a first period that saw a more determined Blackhawks team than we saw for most of the West Coast trip.

There was no comment about a distinct kicking motion from the Avs’ defenseman on the Gustafsson goal.

In the second, Connor Murphy went to the box and Colorado made the Hawks pay. Nathan MacKinnon, who has been really good all year for the Avs, scored his career-high 32nd goal of the season on the advantage to tie the game at one.

Colorado dominated the second, out-shooting the Hawks 18-7. But Berube was solid and the defense in front of him did their job well enough to keep the score tied.

Late in the second, it appeared Brandon Saad scored to give the Hawks a 2-1 lead. But the situation room in Toronto wanted to take another look at the play.

The goal was overturned, and the Hawks coaches were… not thrilled.

Neither side was able to break through in the third and the game headed to overtime. After allowing 18 shots in the second, Chicago limited Colorado to seven in the third – including a power play – to maintain the tie score.

Toews led Chicago with five shots on net, added an assist on the Gustafsson goal to his game-winner and won 12 of 19 faceoffs.

Patrick Sharp skated a team-low 8:14 in the game, while Anthony Duclair was limited to 8:18.

Chicago turned to their kids to kill penalties against a good power play for Colorado and were successful against two of the three Avs advantage. Carl Dahlstrom, David Kampf, Matthew Highmore and Nick Schmaltz all logged time while short-handed.