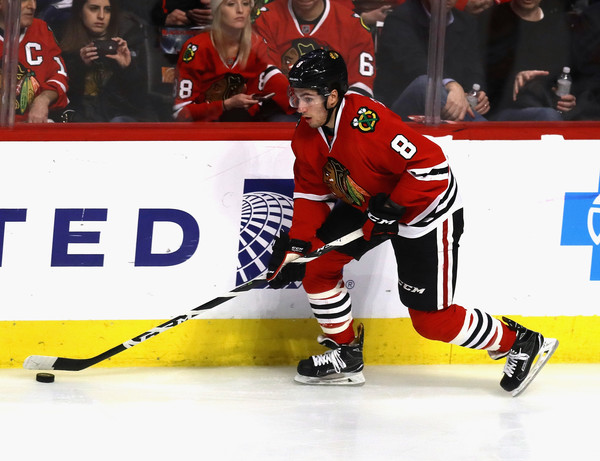 As coach Joel Quenneville continues to search for consistency in his lineup, he may have found a winning combination.

Jonathan Toews has found his offensive groove over the last few weeks, and his chemistry with Richard Panik and Nick Schmaltz has turned that line into a dangerous trio. That group getting hot has helped the Blackhawks win six of their last nine games.

Toews has been among the league’s hottest point producers. In his last nine games, Toews has four goals and eight assists; his 12 points since Jan. 17 are tied for fifth in the NHL. Chicago’s captain is also winning 52 percent of his faceoffs since Jan. 17 as well.

Schmaltz, who turns 21 on Feb. 23, returned to the lineup on Jan. 15 and has since started to get regular ice time with Toews and Panik. Over his last nine games, Schmaltz has scored three goals with one assist and is plus-one. Schmaltz is tied with Patrick Kane for the team lead with eight takeaways over those nine games.

A big key to Schmaltz’s game has been getting the puck on net. Earlier in the season, the rookie deferred to his veteran teammates to a fault, passing when easy shot opportunities presented themselves. In 26 games on October thru December, Schmaltz put only 16 shots on net in 26 games. Over his last nine games, Schmaltz has put 13 shots on net.

Schmaltz’s willingness to shoot the puck has positively impacted Toews as well. Among forwards who have skated more than four minutes with Toews, Artemi Panarin (64.4 in 131:16 together) is the only forward with whom the Captain has a higher Corsi For percentage than Schmaltz (53.33 in 107:55 together).

Panik, who turned 26 on Feb. 7, has two goals and four assists over his last nine contests. He also ranks second on the Hawks with 13 hits over that stretch (Brent Seabrook has 15).

The two wingers have blocked shots as well. Panik (five) and Schmaltz (three) rank third and fourth, respectively, among Blackhawks forwards in blocked shots over the last nine games; rookie Tanner Kero has blocked 13 to pace Chicago forwards during that time frame.

Originally a second round pick (#52) by Tampa in 2009, Panik was acquired from Toronto in a trade that was immediately considered a throw away by both teams. Stan Bowman sent forward Jeremy Morin to the Leafs to get Panik on Jan. 3, 2016.