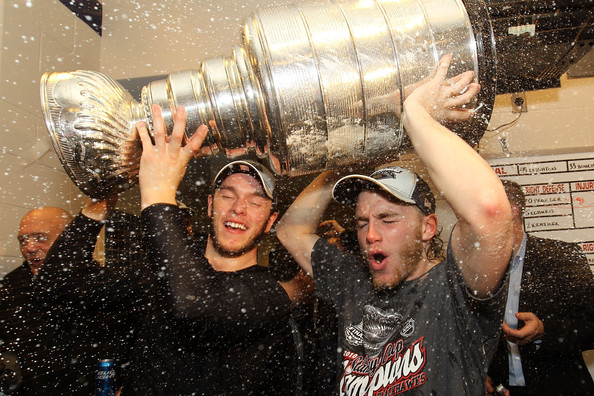 The contracts will begin with the 2015-16 season, and will be the highest cap hits in the NHL.

When Toews and Kane arrived as teenagers, the Blackhawks couldn’t fill the building and hadn’t sniffed the postseason in almost a full decade. A few short years later, both players have a Conn Smythe on their resume and the Blackhawks are one of the premiere franchises in hockey.

It is because the Blackhawks selected Toews and Kane in consecutive drafts that they are a force in the league, and they deserve every penny of these contracts.

I wonder if Toews has smiled yet?

Here are some comments provided on the Blackhawks’ site:

“When we started our journey we made a commitment to our fans to be relevant and to see the Chicago Blackhawks become the best professional hockey organization. There are not two finer symbols of that than Jonathan Toews and Patrick Kane. The commitment we have made to these incredible young men is equal to the commitment they have made to our team, our fans, our entire organization and the city of Chicago. We are excited for our future and proud that they will continue to be a part of that commitment and success for years to come.”

“The signings of Jonathan and Patrick symbolize an important milestone in franchise history. We are driven by the pursuit of consistent excellence and today is a huge step forward.”

“Jonathan and Patrick have become cornerstones of this franchise during their time in Chicago. We are excited to ensure they will continue to lead our organization for years to come.”

“I could not be more grateful for the amazing moments and opportunities I’ve been given by the Chicago Blackhawks. There’s no organization in sports that cares more about the overall experience of their fans and the success of their players. To have the chance to continue with this amazing group of teammates and people throughout the organization is an incredible honor. There’s nothing we want more as players than to continue to win Stanley Cups for the best hockey fans on the planet.”

“It’s great to be able to continue my career in Chicago. Playing with the best organization in sports and the best fans in the game is a blessing. Since I was drafted by the Blackhawks, the people of Chicago have really embraced me and treated me with nothing but respect. I look forward to many more years of success with the Blackhawks.”

“Jonathan and Patrick are among the most dynamic and impactful players in the NHL today. The great support the Blackhawks organization has shown them over the past seven years has been instrumental to their accomplishments on the ice. It has been a great partnership and we look forward to continued success.”

Vacation tweet: Note that Kane/Toews deals are front-loaded as well as the fact they include $44 million each in signing bonuses