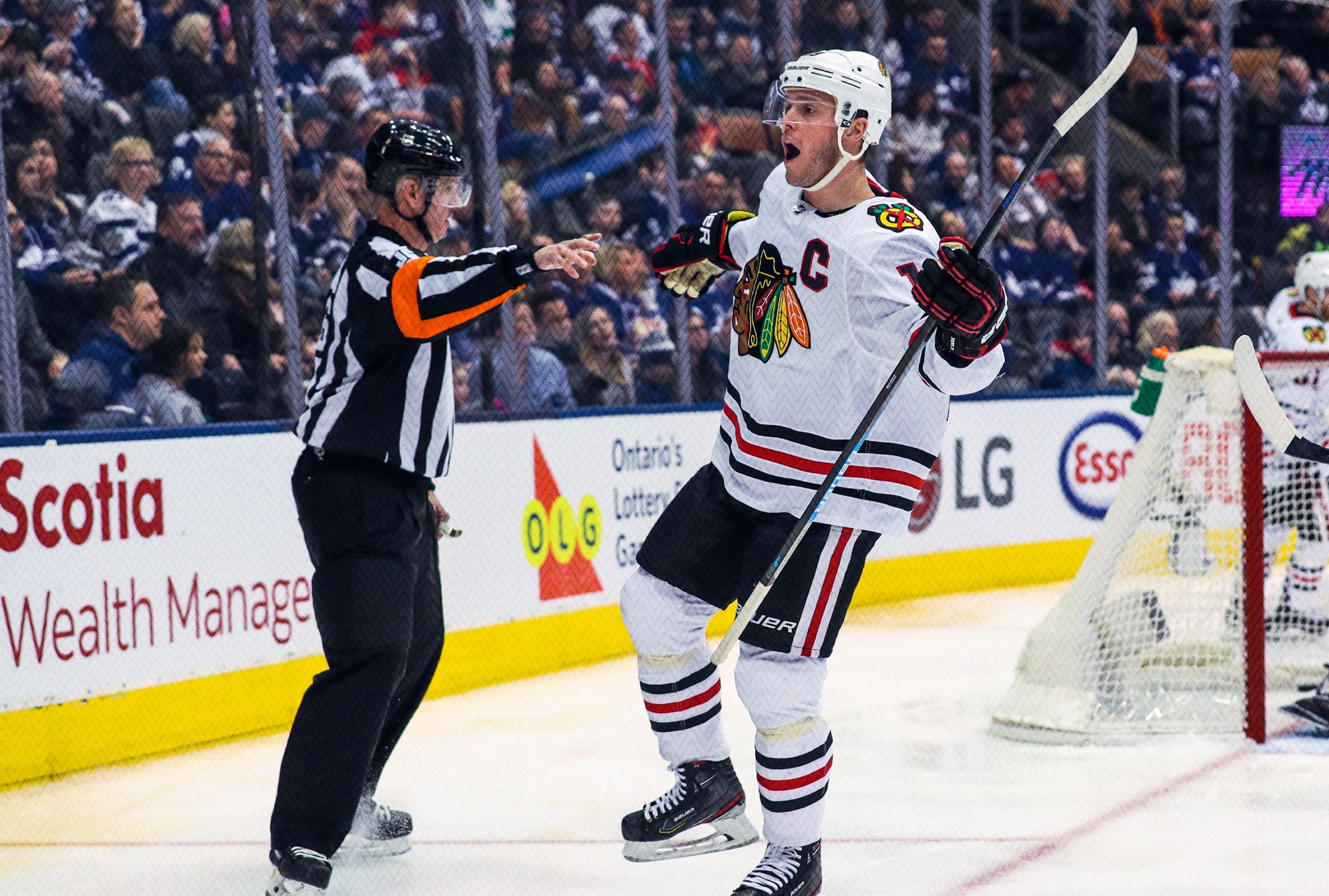 After beating the Senators and Canadiens on the road, the Blackhawks should have had a tougher time with the league-leading offense in Toronto.

Brandon Saad returned to the lineup and Chicago’s offense absolutely dominated the opening 20 minutes. It took only 21 seconds for the Hawks to get on the board. Drake Cagguila lit the lamp first.

Dominik Kubalik and Connor Murphy were credited with the assists.

Five minutes later Jonathan Toews continued his tremendous play with his 13th goal of the season.

The assists on Toews’ goal went to Erik Gustafsson and Alex Nylander.

Chicago wasn’t done, though. Saad got back into the flow of the offense with a goal at 11 minutes into the first to extend the lead to three.

Patrick Kane picked up the primary assist on the Saad goal, the 999th regular season point of his career.

How would the Leafs push back? And could Chicago handle the inevitable rush from the talented home squad?

The Hawks had 48 seconds of penalty to kill to open the second period lasted only 25. William Nylander scored the power play goal to get Toronto on the board early in the second.

Would Chicago answer the bell? Absolutely!

Three minutes later Toews won a battle behind the net and wrapped around the net to beat Frederik Andersen a second time in the game for his 14th of the season.

Gustafsson and Cagguila picked up assists on Toews’ second of the night.

Almost 11 minutes into the second, Toews found Kubalik streaking up the ice and found him with a good pass. Kubalik knew what to do.

The goal gave Kubalik 19 on the season.

Alexander Kerfoot cut the Hawks’ lead to 5-2 at 15:17 but the Blackhawks would extend it again thanks to the magical hands of Kubalik.

Kubalik’s 20th of the season gave him three points in the game. Toews was credited with the primary assist, giving him four points on the night.

Among players to debut with the @NHLBlackhawks, Dominik Kubalik (47 GP) became the sixth to score 20 career goals prior to his 50th game:

After 40 minutes, Corey Crawford had made 21 saves against 23 shots. Andersen, on the other hand, received a couple Bronx cheers for making easy saves late in the second period. He had allowed six goals against 22 shots.

As the third period progressed, Kane got a few terrific chances to reach 1,000 points but Andersen handled the puck well. With a four-goal lead the Blackhawks were comfortable to continue rolling all four lines; Toronto didn’t show as much push to start the third as they did in the second.

The Leafs took a penalty with 41 seconds left in regulation to unofficially put the thing to bed.

Neither side scored in the third period. The Blackhawks held a strong shot advantage and neither side asserted itself offensively; the game was effectively over after 40 minutes.

Duncan Keith is now tied for 10th in #Blackhawks history with 596 points.

Saad skated 17:08 in his return from injury and looked good. He finished tied with Kane for the team lead with four shots on net.

Toews posted four points and won four of only ten faceoffs in just 16:06. He was also credited with two hits and two takeaways and was plus-four on the night.

Kubalik had two goals and one assist in 12:29. Cagguila added three hits and two blocked shots to his two points in 12:40.

Ollie Maatta led the Hawks in time on ice (21:14) and finished tied with Zack Smith for the team lead in hits (four). Slater Koekkoek had another good night, skating 20:16 with two blocked shots, two hits, two shots on net and one assist.

Crawford finished the night with 31 saves and the victory.