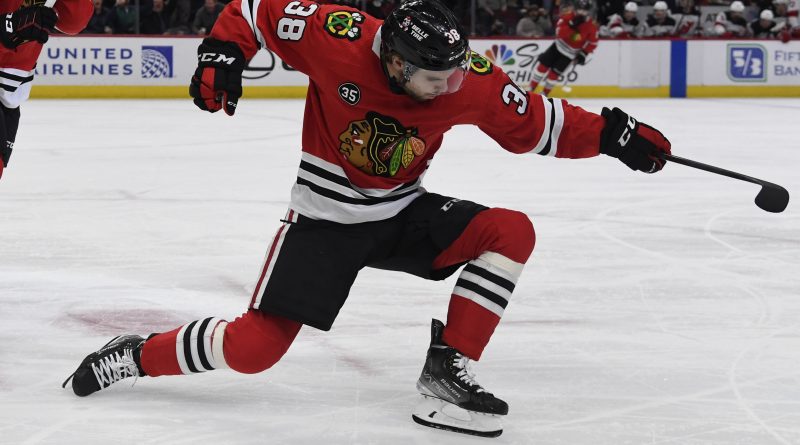 With the New Jersey Devils coming into the United Center on Friday night — after playing in Pittsburgh on Thursday — the Hawks had a great opportunity to take advantage of a young team with many issues that mirror those Chicago is suffering.

For example: among skaters in the entire NHL who have taken at least 200 faceoffs this season, three of the four worst at the dot in the league were appearing in this game. Jack Hughes (29.4 percent) is the worst overall. Kirby Dach (33.6) is third from the bottom, barely ahead of Dawson Mercer (34.9).

Kevin Lankinen returned to the net for the first time in a month. Brandon Hagel was appearing in his 100th career regular season game. And… Erik Gustafsson was dressed. Calvin de Haan (groin) was out so both Jakub Galvas and Alec Regula were active as well.

At 7:34 into the first period, Hagel celebrated his milestone appearance with the game’s first goal. It came off a terrible, ugly turnover by the Devils and he made no mistake with the snipe.

That was a nice way to start the game, but the rest of the first period wasn’t pretty for the Hawks. After not having a lead in 192:34 of game-time, Chicago held the lead for 2:07 in this game. Hughes scored the Devils’ first. Nine minutes later, Yegor Sharangovich — also playing his 100th career regular season game — gave Jersey the 2-1 lead. The Hughes line was getting whatever they wanted; Chicago had no answer for them.

After 20 minutes of hockey, the Devils were out-shooting the Blackhawks 15-8 and had a 2-1 lead. Hughes had two points and hadn’t lost a faceoff. Go figure.

The second period didn’t start in a good way… but turned into momentum. Just 30 seconds into the second period, Michael McLeod caught Connor Murphy high with a hit behind the net. It didn’t look bad initially, but the replay shows Murphy reacted badly to the hit.

Ryan Carpenter dropped the gloves with McLeod. McLeod was hit for boarding in addition to the matching five-minute majors for fighting, so Chicago got a power play. Unfortunately, Murphy went straight to the room. On the broadcast, Pat Foley mentioned there was more energy on New Jersey’s bench during the fight than Chicago’s… he was clearly being critical of the Blackhawks’ bench responding to Carpenter stepping up for a teammate.

Thankfully, the energy was there on the power play. The Blackhawks made the advantage count. Patrick Kane ripped home his 14th of the season for the power play goal.

The Hawks kept the pressure on pretty well for the first half of the period and were rewarded. Ty Smith went to the box at 10:52 into the period and Chicago made them pay again. And it was Kaner again with the goal.

The help goes to the defender’s stick half-way to the net, but Kaner will take the goal — his second of the night.

The Blackhawks got a fourth power play in the period when Ryan Graves tripped Henrik Borgstrom less than 90 seconds after the Smith infraction. And Chicago made it count again. This time it was Hagel again.

We aren’t allowed to have nice things in this town, unfortunately. So after scoring three power play goals in one period, the Hawks gave half of their two-goal lead back. Jesper Bratt received a long outlet pass and beat Lankinen to cut the score to 4-3, which is where the period would end.

Chicago out-shot New Jersey 16-9 in the second period. Alex DeBrincat had an assist on all three goals. Seth Jones had two helpers. Kane added an assist to his two goals. But the Hawks took just a one-goal lead to the third period.

And Hughes had won six of seven faceoffs in the first 40 minutes. Because of course.

Bad news: the Blackhawks’ one-goal lead lasted less than nine minutes into the third period. Jonas Siegenthaler’s first goal of the season tied the game at four at 8:36 into the third.

With just under six minutes left in regulation, we finally got something we’ve all be begging for since… the bubble in Edmonton two years ago? Kirby Dach showed the skill to embarrass the defense and undress the goalie and he actually finished the play with the score.

And then the flood gates appeared to open. Entwistle set up Carpenter for a goal 41 seconds after the Dach goal to give Chicago a two-goal lead.

Once again, sadly, we were reminded that Blackhawks fans aren’t allowed to enjoy anything this year. Bratt scored his second of the night 60 seconds after the Carpenter goal and we were back to a one-goal game with 4:15 remaining in regulation. He was all alone on the right side of the net… and had a second teammate over there with him. The defensive coverage was less than ideal with a two-goal lead.

New Jersey pulled their netminder for the extra attacker with two minutes left.

A turnover found Kane at the blue line going in with 90 seconds left in regulation and he finished off the hat trick — and a four-point night. It’s the eighth regular season hat trick of his career. And Kane is up to 16 goals on the season.

For good measure, Hagel picked off a puck and scored into the empty net to give him a hat trick as well. He is now up to 17 goals on the season.

On the play, PK Subban took the skates out from under Hagel — a blatantly dirty play. So the boys on the ice dropped the gloves and got together. And after the initial conversations were broken up, Hagel went after Subban and got an early trip to the shower after scoring his third of the night.

This was the first time since March 9, 2003 that the Blackhawks got two hat tricks in one game.

The Blackhawks’ last win on home ice was Jan. 15.