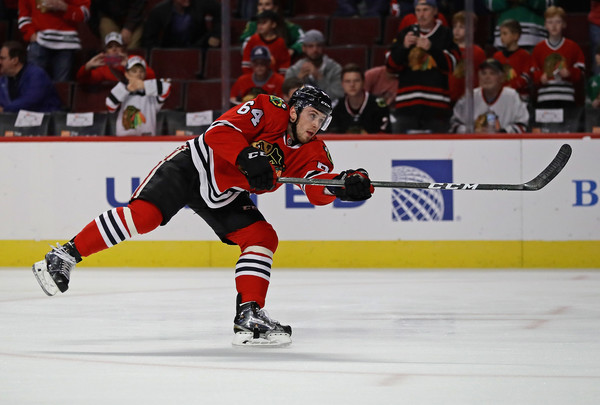 A number of Blackhawks regulars returned to the lineup on Saturday night at the United Center, and the Blues brought their usual garbage to the event.

The end result was the Hawks finally getting on the scoreboard, and the Blues losing both the game and their cool.

Tyler Motte, who had looked really good in the first two games of the preseason but hadn’t found the back of the net, scored twice in the Hawks’ 4-0 shutout. His first goal was a good, dirty goal in front of the net to make the score 3-0 in the second period. The second was a short-handed goal late in the third period.

Artemi Panarin scored the first goal for Chicago, receiving a feed from Patrick Kane and making the deposit. We’ll come back to the concept of those two succeeding together in a moment…

Michal Kempny scored the Hawks’ second goal of the night through a lot of traffic. It looked like Nick Schmaltz or Ryan Hartman might have tipped the shot, but Kempny received credit for the goal.

Chicago exploded for three goals in the final eight minutes of the second period to blow the game open. Then, predictably, the Blues began taking liberties.

Joel Edmundson may owe the United Center penalty box a rent check after the game; Saturday was the first of the month. He was credited with 21 of the Blues’ 31 penalty minutes in the game. Edmundson’s night included called penalties for:

Edmundson was far from alone in the goon department for St. Louis, but the Blackhawks weren’t without their faults. The biggest hit of the night came in the final two minutes when Niklas Hjalmarsson lit up Ty Rattie, whose head was down as he stared at the puck crossing the ice. Hjalmarsson lowered the boom on him and all hell broke loose.

Hjalmarsson received a match penalty for the hit.

Scott Darling was terrific again, stopping all 18 shots he faced for the shutout victory.

Gustav Forsling, Brian Campbell, Dennis Rasmussen and Patrick Kane were credited with assists in the game. Motte was named the game’s Number One Star. A few other observations:

Now back to the Kane-Panarin separation…

Earlier on Saturday when he spoke with the media, Quenneville once again made it clear that he intends on spreading out the offense this season. Which means Quenneville is going to get a good, long look at the two forwards being on different lines to open the year; specifically, Kane could move to a line with Jonathan Toews and the infamous “TBD left wing” player. Motte and Schmaltz are certainly throwing their names in the mix for that left wing spot with strong performances thus far in training camp.

But splitting up the reigning most valuable player and rookie of the year?

Both Panarin and Kane said all the right things after the game, but they still clearly love and prefer to play together. #Blackhawks