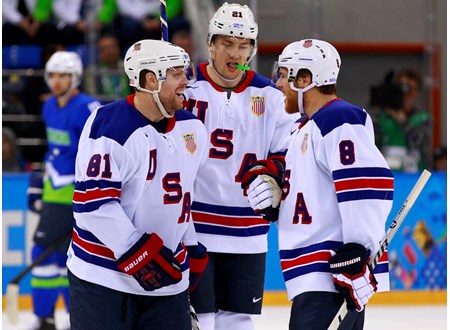 Phil Kessel’s natural hat trick, Joe Pavelski‘s three assists, and a strong performance from Ryan Miller led the US to a runaway 5-1 win over Slovenia on Sunday morning. With the victory, the United States clinched Group A.

Kessel opened the scoring 64 seconds into the game and found the back of the net again less than four minutes later. His third came in the second period, and was followed by goals from Ryan McDonagh and, in the third period, David Backes as the US built a 5-0 lead. Unfortunately, Miller allowed only one goal with 17.6 seconds left in regulation but was very good throughout.

Patrick Kane skated 16:07 and was credited with two shots on goal in the game.

For Slovenia, Anze Kopitar did not return for the third period. Indications after the game were that Kopitar may have been sick. Also on Sunday morning, Russia defeated Slovakia 1-0 in a shootout. Marian Hossa was credited with three shots on goal in 19:41 and Michal Handzus contributed one shot in 20:09 in the loss. Handzus shot first in the shootout for Slovakia, but was not successful.

In the “late” game Saturday, Sweden defeated Latvia 5-3 to clinch Group C. Niklas Hjalmarsson, Johnny Oduya and Marcus Kruger were each without a point in the victory. With three regulation wins, Sweden will be one of the top two seeds (depending on the Canada-Finland final).