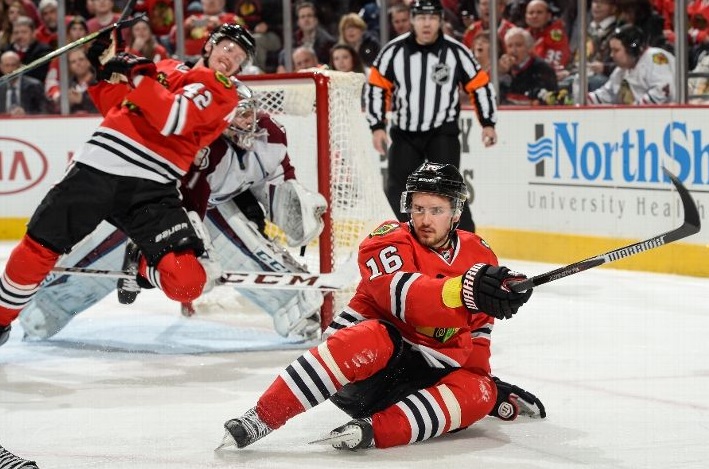 Semyon Varlamov stopped all 54 shots he faced at the United Center and the Avs generated enough offense in the game’s opening 77 seconds to beat the Blackhawks.

Varlamov’s 54 saves established a new NHL record for the most saves in a regular season shutout on the road. Varlamov had allowed five goals against 55 shots in his previous two outings combined, but had everything but the kitchen sink thrown at him in Chicago. The Hawks out-shot the Avs 21-5 in the second period and 16-8 in the third, but weren’t able to beat Colorado’s netminder.

Unfortunately, not many of the Hawks’ shots came with good traffic in front of the net, and Varlamov did a solid job of limiting any rebound opportunities.

Nathan MacKinnon beat Corey Crawford for the game-winner only 53 seconds into the game, and Maxime Talbot added a second tally only 24 seconds later for the sum of the offense.

The scoreboard wasn’t the only surprising part of the Hawks’ performance.

Predictably, coach Joel Quenneville threw his lines into the blender in the second period with the Hawks trailing by two. In his second game since being recalled, Teuvo Teravainen spent most of the second and third periods playing a wing, while Patrick Kane played every other shift to open the third period. Teravainen was the only Blackhawks player to win more than half of his faceoffs (winning three of four), and was credited with one blocked shot in the game, but he got only one shot on net.

Johnny Oduya led the Hawks with three blocked shots, but he and Niklas Hjalmarsson spent much of the night on the bench. Oduya skated only 15:41, the lowest ice time among Hawks defensemen, while Hjalmarsson was on the ice for only 17:41. Michal Rozsival, who didn’t appear to connect on more than one pass all night, skated 19:36 and David Rundblad got on the ice for 15:57.

Bryan Bickell was credited with a team-high five hits in the game.

Crawford settled down after the opening couple minutes and made 22 saves in the game, but took the loss. A tip of the cap to Varlamov and on to the next, which is in Minnesota on Thursday night.

The Wild lost to the Sens 4-3 in overtime, but they were without Zach Parise, who sat out the game to be with his ailing father, JP. Our thoughts and prayers are with the Parise family.