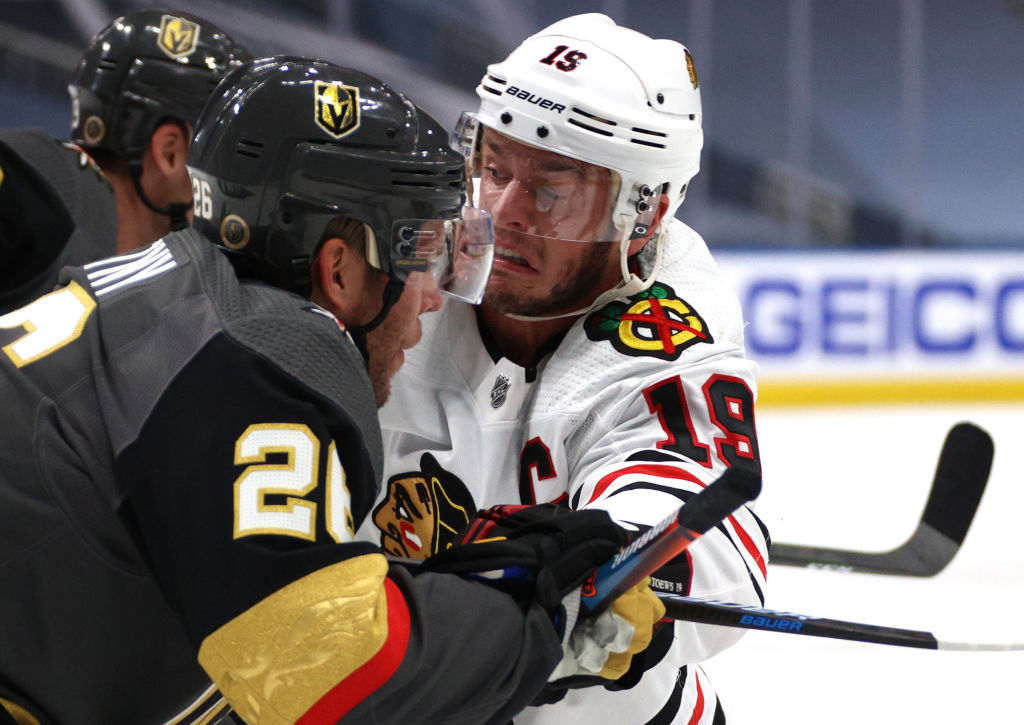 The Blackhawks started Tuesday night 1-0 in elimination games under Jeremy Colliton. So they had that going for them, which was nice.

Chicago’s power play was 1 for 11 in the first four games of the series and it took a heroic effort from Corey Crawford for Chicago to force a Game Five.

How would the Blackhawks answer the bell in their second must-win game of the series?

The first period was a good one for the Hawks. Jonathan Toews opened the scoring at 10:32, finishing in close to the net.

At 18:19 it was Alex DeBrincat finally scoring against the Vegas goaltender; his first goal in the series was into an empty net. His goal gave Chicago a 2-0 lead late in the first.

Two hallmarks of the Blackhawks’ struggles over the past few years have been opponents scoring quickly after a Chicago goal and late in periods. Those trends showed up once again in this game. Max Pacioretty scored with 31 seconds remaining in the first to cut the lead in half.

Vegas held a 13-10 shot advantage after 20 minutes but the Blackhawks played a strong period. The Pacioretty goal was an unfortunate ending to a solid 19 minutes of hockey for Chicago.

Mark Stone tied the game 57 seconds into the second period. Vegas started to play more a more physical game all over the ice and they were putting consistent pressure on the Blackhawks.

But four minutes into the second Drake Cagguila took the puck away inside the blue line and found Patrick Kane all alone in front of the net. He beat Robin Lehner badly to give Chicago a 3-2 lead.

It felt like the next goal would be a big one and it came from the stick of a defenseman whose name gives Blackhawks fans nightmares. Chicago’s penalty kill was perfect in the series, but with Adam Boqvist in the box Alec Martinez was able to end that streak with a tying goal.

The Blackhawks got their first power play of the game at 14:22 into the second but – surprise! – failed to convert.

After 40 minutes of hockey the score was tied at three. Vegas had a 28-19 shot advantage and had some momentum heading to the dressing rooms for the second intermission.

Chicago would need to come out of the room with a strong effort in the third period to survive to play another game.

Alex Tuch scored 94 seconds into the third period to give Vegas a 4-3 lead.

Crawford continued to hold up his end of the bargain in the Hawks’ net but the skaters in front of him struggled to sustain any pressure on Lehner.

The Blackhawks had four shots on net in the first 14 minutes of the third period. Obviously that isn’t going to get it done against a good, strong, deep Vegas team that had a one-goal lead.

With 4:47 left in regulation and the Blackhawks struggling to get the puck out of their defensive zone the Golden Knights made them pay again. Tuch sniped home Vegas’ fifth goal of the night and his second of the period.

Chicago challenged that there was goaltender interference on the play. Nick Cousins appeared to make contact with Crawford as he reached back across the crease to stop the Tuch shot.

The referees decided there was enough contact that the goal would not be allowed. Chicago’s deficit remained one with the season on the line.

John Quenneville, playing in place of Alex Nylander, was on the ice shifting with Toews inside the final three minutes. Why, we don’t know. But Colliton continued to give him regular shifts the entire night.

With Crawford on the bench for the final moments, Colliton sent Adam Boqvist out with the stars. The kid, who has been overwhelmed most of the postseason, showed no sense of urgency in the final 20 seconds. The clock expired and the Blackhawks’ 2020 postseason came to an end.

Toews skated 18 minutes. He won nine of 19 faceoffs and scored a goal. He was credited with just one shot on net but led the Blackhawks with blocked three shots and was credited with two takeaways in the loss.

Kane skated a forward-leading 21:29 in the game. He was credited with three shots on net and two hits.

Cagguila led Chicago with five hits and had the only assist on Kane’s goal in 13:25. Quenneville skated 13:49 with two blocked shots and four hits.

Boqvist skated only 10:55 but was on the ice for the most important moments of the Hawks’ season. He had one shot on net.