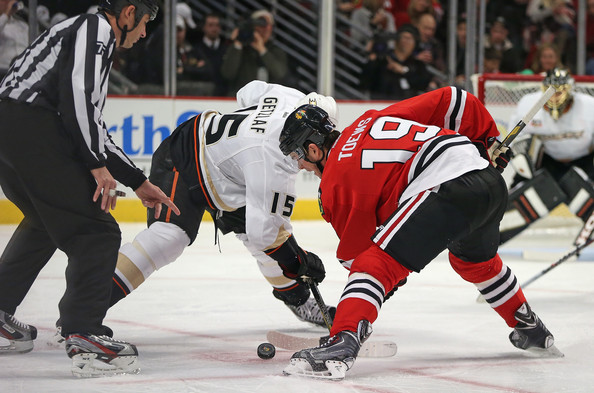 In our previews for the first two rounds of the postseason, we’ve taken time to look back at the regular season series against two division rivals from Nashville and Minnesota. Now that the Blackhawks have advanced to the Western Conference Final, Chicago will face a foe against whom they only had three opportunities to perform this season: the Anaheim Ducks.

Chicago won both regular season match-ups against Frederik Andersen, winning by identical 4-1 scores at the United Center and the Honda Center. Anaheim won a game 1-0 in Chicago on October 28 with John Gibson in net.

This series will put the two most explosive groups remaining in the playoffs on the ice against each other, with the postseason’s offensive leaderboard in focus on a nightly basis. The scary reality for both coaches is that each team has a sleeping superstar. Ryan Getzlaf has scored only twice and Marian Hossa just once entering the conference final series. Will one of them break out with a big offensive series?

That may be determined by the men in the blue paint. Looking ahead, there will be an emphasis on the goaltenders in the coming series. Anaheim is the only remaining team in these playoff scoring more every night than the Blackhawks, and their superstars have come to play just as much as Chicago’s top tier. How will Andersen Corey Crawford be able to stand up against the opposition?

In the second round:

Anaheim’s blue line is led by Francois Beauchemin, who is averaging 23:52 per night. He’s less than one month away from his 35th birthday, however, and has been buoyed by three youngsters: Sami Vatanen (turns 24 on June 3), Hampus Lindholm (21) and Cam Fowler (23), all of whom are skating more than 21 minutes per night. The Ducks’ are also skating Simon Despres and Clayton Stoner more than 17 minutes per night, which could be a major factor as the Hawks look to David Rundblad to replace Michal Rozsival.

Chicago’s blue line has four veterans averaging more than 24 minutes per game, including active postseason ice time average leader Duncan Keith (30:37 per night). Of course Chicago’s numbers have been impacted by their triple-overtime win in Game Four against Nashville, a night on which Keith skated more than 46 minutes before Brent Seabrook buried the game-winner. Keith did skate more than 29 minutes in three of the four games against Minnesota, however.

Another key area will be the faceoff circle, where each side brings elite players to the dot. Jonathan Toews is the active leader in the Western Conference in faceoffs taken (227) and has won 50.7 percent against tough competition from Nashville and Minnesota. Ryan Kesler has won 63.7 percent of his 215 draws while Ryan Getzlaf has won 51.4 percent of his opportunities at the dot for Anaheim. As a team, the Ducks are winning 55.4 percent of their faceoffs – which ranks second behind only Washington – while the Blackhawks are winning 51.4 percent.

This series may be won on special teams. Anaheim is the postseason leader, converting 31 percent of their power play opportunities (nine power play goals on 29 advantages through nine games). The Blackhawks, meanwhile, are killing only 72.7 percent of their opponents’ power plays; Chicago has allowed nine power play goals in 33 short-handed situations over ten games thus far. The Hawks will need to stay out of the box and be effective when they are short-handed against a hot Anaheim offense.

If there is one area where the Hawks hold a distinct advantage it’s experience, especially behind the bench. This is the first time Bruce Boudreau will coach in a conference final series, while Joel Quenneville has been here in five of the last seven postseasons. The experience between the pipes is also important, as Andersen has played in 16 playoffs games in his career to date; Crawford won 16 games in 2013 alone.