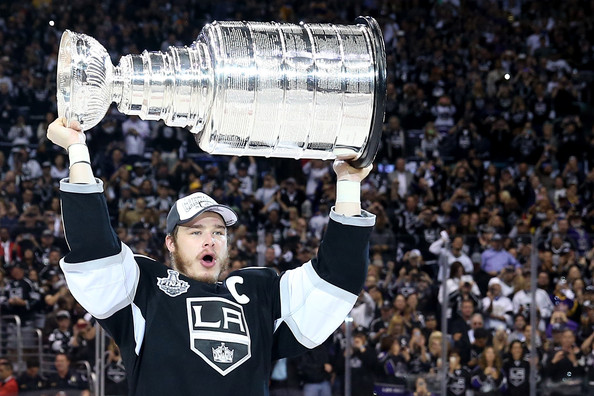 When you’re defending the Cup, you’ve earned the right to be our final preview from the Pacific Division. After looking ahead at the Flames, Oilers, Coyotes, Canucks, Sharks and Ducks, let’s discuss the 2014-15 Los Angeles Kings. The Kings are a bit like the San Antonio Spurs in that they don’t seem to care much about the regular season. They finished last year third in the Pacific with 100 points, and then spotted the Sharks a 3-0 lead in their first round series before stunning San Jose to advance. The rest, of course, is history.

Unlike their division rivals in Vancouver, the Kings had very little turnover this summer. The loss of Mitchell’s leadership on the blue line is significant, but he’s older and would have been too expensive to bring back. What’s more important for the defending champs is that they will continue to have arguably the best all-around players in the game playing big minutes.

Doughty is coming off a disappointing season offensively (37 points in 78 games), but is the odds-on favorite to win the Norris Trophy in 10 months. Up front, Kopitar will win a Selke at some point in his career and is finally receiving the recognition he deserves as one of the finest two-way forwards on the planet.

Bringing back Marian Gaborik was an intriguing play, more because of the terms of the contract than that the offensively challenged Kings re-signed the scorer. Gaborik, 32, signed a seven-year, $34.125M deal to stay in Los Angeles for what appears to be the rest of his career. If he produces like he did in the playoffs (22 points in 26 games), the Kings will have no problem paying him as long as he’s active.

Their championship team will return almost intact from a year ago, and they appear to be set to compete for the title for the foreseeable future.