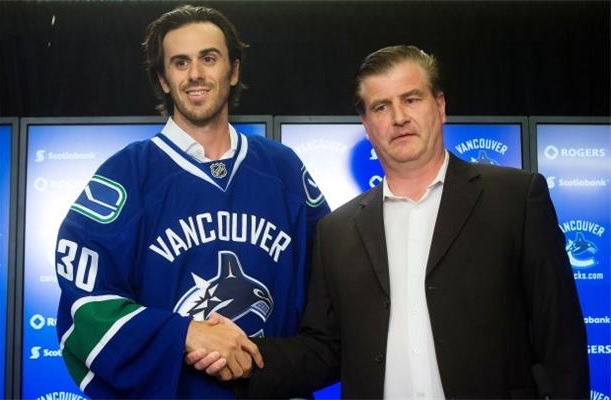 So far, our Western Conference previews have looked at two consistent bottom-dwelling teams in the Calgary Flames and Edmonton Oilers. Now we’ll look forward to a team that may face the unfamiliar setting of looking up at the playoff picture for much of the upcoming season, the Vancouver Canucks. Has there been a bigger clusterf*** in the NHL over the last three years than the Vancouver Canucks? They have gone from arguably the best pair of goaltenders in the NHL to throwing money at Ryan Miller as a free agent this summer, and the offense that was among the NHL’s leaders a couple years ago produced only one 50-point player last year.

With a new season comes even more change for the Canucks, and the changes started at the top. Jim Benning replaced Mike Gillis as General Manager, and he had a lot of work to do immediately. Gone is John Tortorella, who was never a fit with that roster, and in comes Willie Desjardins to replace him. Desjardins led the Texas Stars to the 2014 Calder Cup championship after spending a couple years with the Dallas Stars.

Kesler got out of town, but was traded inside the division to the Anaheim Ducks. Jason Garrison was traded back to Florida. They did well to bring back a couple good young forwards in Vey and Bonino who will help bring some jump back into an offense that relied too heavily on the Sedins and Kesler last year.

Benning will have a busy year ahead. The Canucks have seven players set to hit restricted free agency next summer, including new acquisitions Vey, Sbisa and Markstrom.

The Canucks don’t look like a playoff team right now, and will need bounce-back seasons from their remaining leaders to have any prayer of a postseason appearance. But, even with the significant players leaving, they still have Henrik and Daniel and Miller is still an above-average NHL goaltender. They did well to bring in some young talent, but getting the roster to mix will be a season-long task for Desjardins.