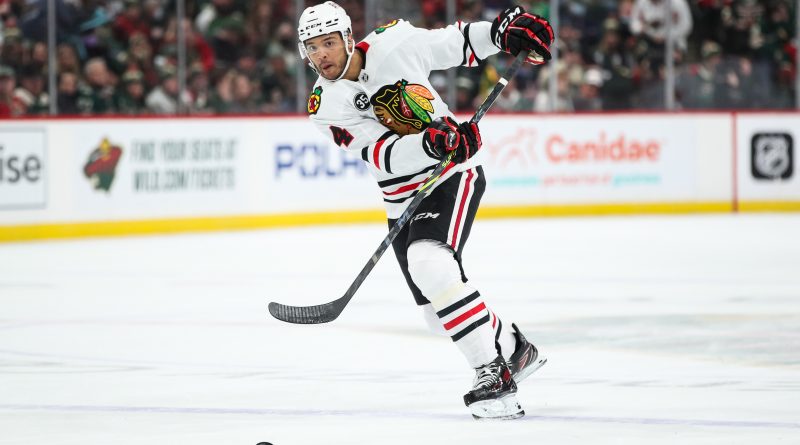 Friday morning brought news that the Chicago Blackhawks signed 19-year-old defenseman Ethan Del Mastro. The fourth rounder from the 2021 NHL Draft getting a contract is an intriguing proposition and raises more questions than answers as general manager Kyle Davidson begins charting his path as the lead voice in Chicago’s front office.

Davidson inherited an organization that had a stockpile of blue line prospects and too many bodies for the NHL roster, but he’s done more to add to that area of depth than anything since becoming the interim GM. Davidson has signed six players to contracts as the general manager of the Blackhawks. Three of those six are defensemen (Louis Crevier, Alex Vlasic and Del Mastro). Only one of the six is a forward; Reese Johnson inked an extension earlier this month.

The cupboard is overflowing on the back end for the Blackhawks. Obviously only three contracts have been written by Davidson, but he was part of the front office group that has heavily invested in defensive prospects in recent drafts. As the permanent general manager this summer, Davidson will navigate a draft and free agency as the man for the first time; he’s already been through an NHL trade deadline (a deadline that saw him not move any of his defensemen).

So what do the Blackhawks have on the back end moving forward? The deal with Del Mastro gives us a good excuse to look around the organization and evaluate what the present and future might hold.

Here’s the contractual situation of the current NHL veterans on the Blackhawks’ payroll:

So we have four veteran NHL defensemen who are signed already beyond this season: two right-handed shots and two lefties. Bowman gave modified no-trade clauses to both Seth Jones and McCabe when they signed with the Hawks. And it’s worth noting that the listed cap hits for both Murphy and Seth Jones are on contracts in their first years next season.

Regarding the pending free agents, it will be very interesting to see what Davidson does with Caleb Jones. Stan Bowman tried to acquired Seth’s brother for a few years before finally getting him from Edmonton in the deal that sent Duncan Keith to the Oilers. He’s still only 24 years old and is coming off a deal with an $850,000 cap hit. But do the Hawks need him?

The same can be asked of Kalynuk, who was a nice surprise last year but hasn’t been able to get any run at the NHL level (he’s appeared in five NHL games this season). What’s crazy: Kalynuk is older than Caleb Jones (and Stillman); he turned 25 on April 14. After appearing in 21 games with the Blackhawks during the 2020-21 season, he’s been in Rockford almost this entire season. As a pending RFA, the influx of more young bodies with contracts makes it a big question if Kalynuk will get another contract with the Blackhawks.

It feels obvious that de Haan won’t be back next season; the Hawks tried to move him in the expansion draft and somehow didn’t get a deal done before the trade deadline. And we’ve been pretty outspoken that Gustafsson shouldn’t have been here in the first place this season.

Given the play of some of the young defensemen we’ve seen this season, it would be completely understandable if all four of the free agent defensemen were gone next season. And Caleb Jones and Kalynuk might have some value on the trade market if Davidson were to pursue moving them before/during the draft.

If we assume all four free agent veteran defensemen are not back in Chicago next season, that still leaves only 2-3 spots available for a prospect to be promoted. And the Blackhawks will need to promote someone from Rockford next year because there are still too many bodies for the IceHogs’ blue line as well.

The Blackhawks already have a group of six prospects who have seen some action in the NHL on their resumes. Will some of them fill out the NHL roster next year? If so, how many will earn a promotion?

So we’ve got six defensemen in the relatively young but with NHL experience bucket, all vying for those limited roster spots in Chicago next season. Regula and Vlasic are finishing the season with the Blackhawks and they’re both skating well with improved ice times and being used in different ways by the coaching staff down the stretch.

It’s important to recognize that, from this list of six, only two — Regula and Mitchell — are right-handed shots. But they play different games; Mitchell has emerged as a potential top-four defenseman with his improved all-around play in Rockford this season (he has 10 goals and 24 assists in 55 games with Rockford) while Regula obviously has more size. We’ve seen a little bit from Phillips and Galvas, but they’ve shown tantalizing skill at times while skating with the Blackhawks.

Four of these six defensemen have just one year remaining on their current contracts, however. Regula, Mitchell, Galvas and Beaudin will all be restricted free agents in the summer of 2023. Even so, that’s 10 bodies under contract (without re-signing any FAs) and the Hawks have been linked to 23-year-old Swedish defenseman Filip Roos as well.

If the Blackhawks are going to move someone off the blue line in this group, it would be to make room for the next wave of signed defensemen to get some run in the AHL. And there are three players with contracts who could be considered for those spots.

Remember when fans were crying about the size of the Blackhawks’ defensive depth? When the perception was that the Blackhawks were only drafting 5-9 puck-moving skaters for the back end? Now, you look up and down this list and see that only three of the nine defensive prospects signed are shorter than 6-2.

To be perfectly clear about these final three defensemen: Crevier and Del Mastro are not finished products, and Del Mastro could see another season in junior. They were late-round picks in the last couple drafts who have clearly impressed the organization enough to get a contract, but they’re in no way ready for the NHL. But the depth ahead of them in the organization will afford the front office time to let them get some professional games on their resumes and see what the team has in each of them.

Again, two of these three are left-handed shooters; the Hawks have a need for more righties in the organization.

40 thoughts on “What Are The Blackhawks Doing On The Blue Line?”