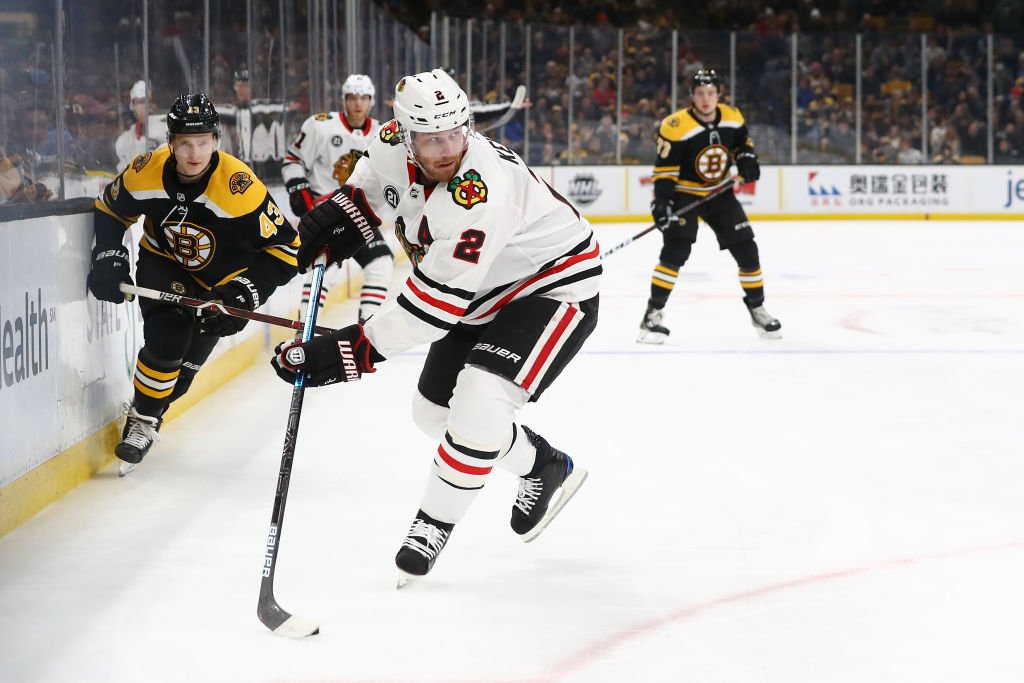 The Blackhawks blue line is going to look different in the coming season. Slater Koekkoek and Olli Maatta are both gone, making room for newly acquired Nikita Zodorov and incoming rookie Ian Mitchell.

Chicago has a crowded group of defensemen, however. The Hawks claimed Nick Seeler off waivers last season, but it appears to be impossible to see a way he’s on the NHL roster next year. Similarly, the Hawks signed college free agent Wyatt Kalynuk to a two-year, entry-level deal and he now appears to be on the outside looking in.

Without Seeler or Kalynuk, Chicago will still have seven defensemen (including Mitchell) fighting for ice time at the NHL level.

So how will Jeremy Colliton roll out his defensive pairs whenever the new season begins?

The only defensive pair the Blackhawks had to produce a better Corsi For % and/or better Shots For % than Keith-Murphy with at least 195 minutes of 5-on-5 together was Maatta and Koekkoek, neither of whom are on the Blackhawks roster currently.

Zadorov is new to the Blackhawks. Of the internal options, de Haan would figure to be the best left side defenseman to pair with Boqvist but they only spend 4:48 together at 5-on-5 last year and it wasn’t very good when they were paired. Zadorov skated an average of 17:46, which would figure to have him as a third pair defenseman. But as the Blackhawks build for the future, giving Boqvist a more physical, stay-at-home defenseman should give him more ability to take the reigns offensively.

Last season in Colorado, Zadorov spent most of his 5-on-5 time with Ian Cole (397:22). He also spent 223:16 with Samuel Girard and 164:30 with Cale Makar, posting a 52.20 Corsi For % with Girard and 51.97 Corsi For % with Makar. Girard spent more time with only Erik Johnson last season; Makar spent more time with only Ryan Graves. Pairing him with Boqvist would be a similar assignment in Chicago.

The other reason to start the season with Zadorov getting increased exposure is his contract. He’ll be a restricted free agent after the 2021 season, meaning he’ll be playing for money and the Blackhawks will need to figure out how he fits into their plans beyond the coming season. Murphy and de Haan both have two years left on their contracts but could be pieces the Hawks look to deal at the deadline if the rebuild includes moving on from veterans. Zadorov (25) is younger than Murphy (27) and de Haan (29) and gives the team size on the left side.

Why de Haan, Mitchell and Seabrook on the third pair?

This comes down to how the Blackhawks use their veteran defensemen. The only defensemen who skated more total time short-handed than de Haan last year were Keith, Murphy and Maatta. Obviously Maatta is no longer with the organization, meaning a healthy de Haan will be asked to play a more important role in penalty killing. Coming off his second hip surgery, how much the Blackhawks can realistically ask of de Haan is something that will need to be watched in the coming season. Pairing him with Mitchell is an ideal spot for Mitchell to get used to the NHL game. One would figure that, once he’s in the NHL, Mitchell would figure into the Hawks power play with Keith and Boqvist as well.

What the Blackhawks do with Seabrook will be fascinating to watch. If he is back to being a more healthy version of himself, Seabrook could still be a valuable player on the blue line. But he had three significant surgeries last season and isn’t getting younger. Keeping him healthy and finding ice time for a leader in the room will undoubtedly be Colliton’s toughest job in the coming year.

156 thoughts on “What Could The Blackhawks Blue Line Look Like?”