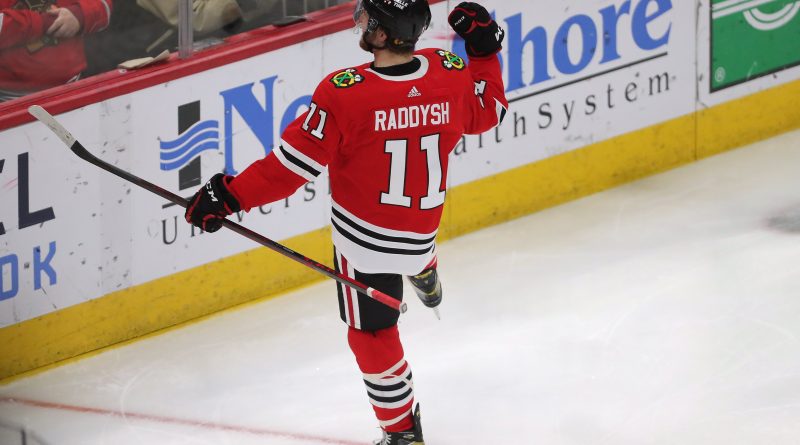 Kyle Davidson has now made six trades since becoming the general manager of the Chicago Blackhawks. Three of those deals came while he was wearing the interim tag; three have come in the past few days leading up to the NHL’s trade deadline.

For now, we’re going to ignore moving Malcolm Subban for nothing and flipping Chad Krys for Kurtis Gabriel; those aren’t headline deals that will impact the NHL roster any time soon/ever.

But the other four deals give us an idea of what Davidson is up to with his stated rebuild. And there’s a pattern we should pay attention to as we move forward.

Going back to the trade that sent Alex Nylander to Pittsburgh, Davidson has acquired three NHL forwards: Sam Lafferty, Taylor Raddysh and Boris Katchouk. They all share something in common: size. It’s something the Blackhawks have lacked up front for years; many in the comments on this site have cried about the Hawks’ lack of big forwards for a while.

Lafferty (6-1, 195) has shown decent speed and grit since he got to Chicago. In 27 games with the Blackhawks, Lafferty has been credited with 55 hits and 18 blocked shots in 14:10 per game. After scoring six goals in 94 games over three seasons with the Pens (all six in 50 games in 2019-20), he has three goals already with the Hawks. He was originally a fourth-round pick in 2014.

Raddysh (6-3, 198) has been credited with seven hits and one blocked while averaging 15:17 per game. He also has one goal and one assist in two starts with Chicago. He was originally a second-round pick in 2016.

All three of these guys brings a more physical style to the Blackhawks’ forward group. We’ll see if they can score over time. And we’ll eventually see how the organization uses them in the lineup; two games is far too small a sample size for us to fully judge Raddysh or Katchouk. But it’s clear to see what Davidson values up front.

What about the rest of the assets Davidson has acquired?

Like the rest of the league, it appears the feeling the 2022 NHL Draft isn’t the deepest draft in recent memory. The Blackhawks trading their first-round pick to Columbus for Seth Jones (with top-two protection only) now appears to be an indication that Stan Bowman felt the same way Davidson and other current GMs do about the crop coming into the league this summer. Indeed, it doesn’t look nearly as bad that the Hawks moved out of the first round to get a top-pair defenseman now as it did when they made the trade (to some).

Davidson’s two deals on Monday position the Blackhawks well to make an impact in the future.

In the 2022 NHL Draft, the Blackhawks now have two picks in the second round and three in the third. There are conditions on Minnesota’s second and Edmonton’s third that could improve them; the Wild making the Western Conference Final and Fleury winning four games makes that a first and there are similar conditions on the pick Chicago got from the Oilers for Duncan Keith last summer.

The Blackhawks own eight picks in the 2022 draft, of which only three are originally theirs. We’re going to assume the Blackhawks don’t win the draft lottery and land in a top-two pick and their first-round selection goes to Columbus this year.

Chicago now owns Tampa’s first and second-round picks in 2023; they acquired the second-round pick in the trade with Tyler Johnson that sent Brent Seabrook’s LTIR cap space to Tampa last summer. The Blackhawks also still own their picks in those two rounds as well, giving Chicago nine picks in the 2023 Draft — which, again, is considered significantly deeper than this year’s draft class.

The Blackhawks also now own nine picks in the 2024 NHL Draft; they acquired Tampa’s first in the Brandon Hagel trade and Calgary’s fifth for Ryan Carpenter. Chicago does not own their fourth-round pick in ’24 (in the Hagel trade).

If you are sincere about rebuilding, the best way to do it is with draft capital. And now the Blackhawks have plenty of depth in upcoming drafts to either add players to the pipeline or maneuver their way up/down the draft to get the right players. They also now have picks they can utilize in trades if the right opportunity presents itself.

Then there’s the matter of the trades Davidson didn’t make.

The league was hot for defensemen at this trade deadline — especially guys who shoot left-handed. And the Blackhawks had a few bodies who could have been moved. Calvin de Haan, specifically, was a player most thought would be gone before the deadline. But he’s still here. Why?

"If the value’s not met, then you value the player more than anyone else. So, we’re happy with the players that are here. We value them more than other teams around the league … so we’re happy they’re still with the Blackhawks."
– Kyle Davidson when asked about Calvin de Haan

In saying he values the player more than the market would bear, Davidson is telling us he didn’t get a good offer for de Haan. But how good should the offer have needed to have been to move a veteran in the final year of his contract? The same can be said for Dominik Kubalik, who is an RFA this summer.

There are factors that play into both of those players still being here, and the perception that Davidson didn’t make a deal when he should have.

de Haan has had injury issues over the past few years and carries a cap hit that wasn’t going to easily be moved to a contender without the Blackhawks retaining money. Chicago already retained money on Fleury and has other dead money on their books, not to mention the money going to players who have been or currently are on LTIR. There may not have been an appetite from ownership to retain more money, and other teams may not have been willing to make a deal for de Haan without that being part of the trade.

Kubalik is completely lost, and a qualifying offer for him will be north of $4 million this summer. He isn’t worth that money right now, despite what some will say about his 30-goal rookie season still being on his resume. So while the potential to retain some rights on the player could have been enticing, the reality is most GMs saw what Blackhawks fans have this year: a forward who is rarely engaged and hasn’t shown the same spark that made him a Calder finalist.

Davidson wants this team to be relatively competitive the rest of the way this season and wasn’t going to eat money for the sake of a pick or prospect that isn’t going to help the organization.

Overall, Davidson did solid work before the deadline. The future is brighter today than it was on Friday, even with the Hagel deal hurting fans and his former teammates similarly. And the point is: Davidson cares more about the future than the present. And for a rebuilding general manager, that should be his focus.

45 thoughts on “What Did The Trade Deadline Teach Us About Kyle Davidson?”