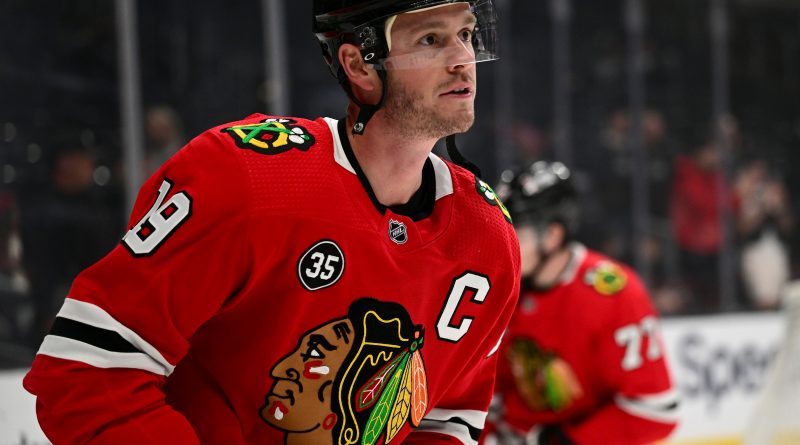 Every single one of those games has come in the Blackhawks’ sweater. And 137 more have come in the postseason with the Hawks. And there have been Olympic games representing Canada in there, too. Since he was selected third overall in 2006 and joined the NHL club a year later, Toews has been the Chicago Blackhawks.

Now that he’s at this milestone, it’s a good time to take a step back and assess his place in the history of Chicago’s Original Six franchise.

Here’s the easy reality: Jonathan Toews is the greatest captain in the history of the Chicago Blackhawks.

He started his career with an All-Rookie Team honor and was runner-up for the Calder Trophy to Patrick Kane. He was named captain before the 2008-09 season.

If we look back at the history of the gentlemen who have worn the “C” for Chicago, nobody has done it longer than Toews. Early in the franchise’s history, Johnny Gottselig was the captain for six seasons (1934-35 to 1939-40). Pierre Pilote wore the C for seven seasons in the 1960s. Darryl Sutter wore it for five seasons in the early 1980s and only two players — Dirk Graham and Chris Chelios — served as the captain in the 1990s.

For the sake of longevity in the captaincy, he’s the longest.

Only seven players have appeared in 1,000 regular season games with the Chicago Blackhawks before Toews: Stan Mikita, Duncan Keith, Brent Seabrook, Patrick Kane, Bobby Hull, Eric Nesterenko and Bob Murray. Toews will be the eighth, and half of those have come from this recent generation of dynasty leaders.

That should make you understand just how special this past 15 years have been in the history of the Chicago Blackhawks. In 95 years of existence, some of the top players in the history of the franchise — whether it be in point production, scoring, individual awards, games played or championships — came from this era.

Toews is a sure-fire Hall of Famer. That was true in 2015, when he was handed the Stanley Cup by NHL Commissioner Gary Bettman for a third time. He was the youngest player ever to become part of the exclusive Triple Gold Club; he did that with the Olympic gold and Cup double in 2010.

He won the Conn Smythe as the most valuable player in the postseason in 2010. He had 29 points in 22 games in those playoffs and was a truly dominant center.

For a decade, Toews was in the conversation for the gold standard at center in the NHL. Yes, Sidney Crosby got the magazine covers and individual accolades and Patrice Bergeron won more Selkes, but not many players were tougher to play against than Toews.

And he battled through pain. A lot. When I interviewed him in 2012 for a cover story of The Fourth Period Magazine, he shared the grueling battle he had with concussion symptoms during those seasons. He wasn’t right many nights, but he still showed up and went to work and performed.

Toews sold sweaters, showed up in Chevy commercials and was the unquestioned leader of the Chicago Blackhawks for more than a decade.

So what do we do with the current state of affairs in Chicago?

Over the years, many fans have begged for “Captain Serious” to lighten up. We wanted to see the smile, not the famous intensity. We wanted to know how he really felt. Speak your mind! Please!

Well, recently, Toews has been more open. And it hasn’t been as welcomed as fans would have expected ten years ago.

He has been open about dealing with health issues that led to fatigue in the bubble when the NHL returned from the COVID break in 2020, and he took the following season off to get his body and mind right.

Since coming back this season, Toews has struggled on the ice. There’s no denying that; his offensive numbers haven’t been there. He’s still strong in the faceoff circle — he always has been. But fans want more from him in the box score. That’s largely because the 2018-19 season was perhaps the best offensive season of his career. He scored 35 goals and had 81 points, both career highs. It appeared age wasn’t a problem. But… it was. It is for everyone.

As this struggling season has progressed, Toews has been more open with his answers with the media as well. And that has, frankly, pissed a lot of fans off.

He was recently asked about his long-term future with the Chicago Blackhawks after the trade deadline and he honestly answered that seeing guys leave (again) does make him wonder if he’ll be a Blackhawk forever.

Well… let’s think about that. We’ve all watched Tom Brady, “forever a Patriot,” leave New England and win a Super Bowl in Tampa. Matthew Stafford followed suit, leaving Detroit and winning a Super Bowl with the LA Rams. LeBron James has more stickers on his suitcase than any prolific superstar in history; Magic and Bird never changed jerseys. And even though many will say “if Gretzky can get traded…” or “Jordan was a Wizard,” Blackhawks fans are still angry that Chris Chelios wore a Detroit sweater.

So when Toews says he has pause considering his future recently, while that isn’t ideal for the hearts of fans, and his play on the ice has been as frustrating for fans as it has been for him, the easy response is anger.

But the other context behind Toews’ comments is… what is Toews’ long-term future in the NHL?

He turns 34 on the final day of the regular season, which means he’ll be 35 when his current contract expires after next season. I think we’re all on the same page that trading his $10.5 million cap hit — even with a big part retained — is going to be incredibly hard to do, even if the Hawks wanted to move on and Toews wanted to leave (which I do not believe he does at this time).

Toews should be a third-line center at this point. And we expected that when he and Kane signed their matching eight-year contracts in 2014. They broke the bank, setting the new standard for superstar contracts when they received matching $10.5 million per season deals. But we all looked forward at that point in 2014 and knew he would be 35 when the contract came to an end.

The problem hasn’t been Toews’ transforming to a third-line center. It’s been the organization’s failure to develop two centers who were as good/better than him in the past decade. There has been no graceful transition for Toews; his health pulled him out of the lineup at a time when the club was struggling and the cupboard hasn’t been replenished.

They have been forced to rely heavily on Toews — more heavily than they should at this stage of his career.

But he keeps showing up for work.

It is completely understandable that Toews’ comments about his future received a burning response; Chelios told every microphone he could find that he would never play for the Red Wings and then… he went there. We also need to recognize that his career may not be long after this contract — and he knows that better than any of us.

Toews has poured his heart, soul and body into making the Chicago Blackhawks a championship organization on the ice. Like Seabrook, he has left more of his body on the ice than many of us will ever realize.

So as Toews takes the ice for the 1,000th time, let’s put the “eff him” and “trade his ass asap” comments in the drawer for a few hours. Let’s respect and honor the warrior who led the team to three championships. He might never be an 80-point player again, but he’s been the greatest captain in the history of the organization. And the next captain, whenever that comes to pass, will have huge skates to fill.

28 thoughts on “What is Jonathan Toews’ Legacy with the Chicago Blackhawks?”