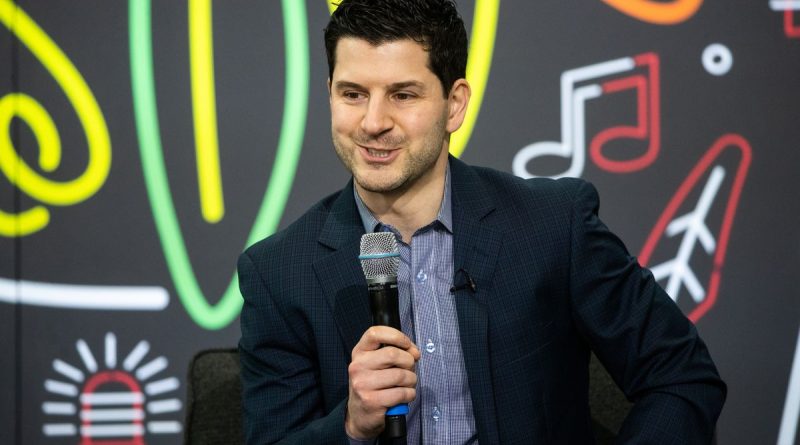 Today is the first day Kyle Davidson wakes up as the permanent general manager of the Chicago Blackhawks. Officially.

Yesterday, we listened to him speak as he was introduced in that role. He talked about the team re-entering a rebuild; something Stan Bowman said they were going to embark on a couple years ago and then decided to throw the plan out and spend like a mad man last summer. Bowman’s attempt at buying bandaids for the dysfunctional roster he assembled has failed miserably, and now Davidson has been tasked with piecing together the future of the organization.

So what should we expect from Davidson?

In the short-term — the incredibly immediate short-term — we know that Davidson has less than three weeks before the trade deadline. And he’s now going to build a support staff around him to change the culture of the Blackhawks’ front office.

We should expect some movement, but I caution fans to want the future of the franchise to be corrected with a couple deals. The pipeline is stocked full of interesting pieces on the blue line but there isn’t much forward depth in the organization. And game-changing forwards don’t grow on trees; Davidson has a lot of work to do.

My understanding is that everyone is available. Everyone.

Now, again, let’s hit the pause button. The cost to acquire Alex DeBrincat or Brandon Hagel will rightfully be incredibly high. But if a team is willing to step up with the kind of offer that is at least intriguing for either of them, the Blackhawks should at least listen. Remember: people laughed at the Dallas Cowboys when they traded Herschel Walker to the Minnesota Vikings and that trade led them to multiple Super Bowls.

But this roster has too many flaws to solve through the current group of assets.

So, before the trade deadline, let’s patiently watch Davidson do his new job. The good news is he has been in the role for a few months and can now start having more substantial, real conversations with other teams. He might not make every trade we want to see now, but we will learn a lot about his vision for the franchise with the deals he does make.

In the mid-term, the upcoming NHL Draft has some potential. And the Blackhawks might not have their own first-round pick any longer (assuming no miracle in the lottery), but they could move back into the first round via trade between now and the draft. How Davidson uses his picks will also show us a lot about what he values in prospects — and how he maneuvers his way around the draft if/when trades become possible.

In the long-term, Davidson needs some time to turn this ship around. He’s going to bail water for a while, but he now has the job of returning this franchise to the glory we experienced with the dynasty of the previous decade. It isn’t impossible to turn a franchise back into a contender; we’ve seen it before. But we need to allow ourselves to at least give him the opportunity to establish himself as the general manager of the team.

Who is Kyle Davidson as a general manager? We’ll learn more about that starting today.

23 thoughts on “What Should We Expect From Kyle Davidson?”