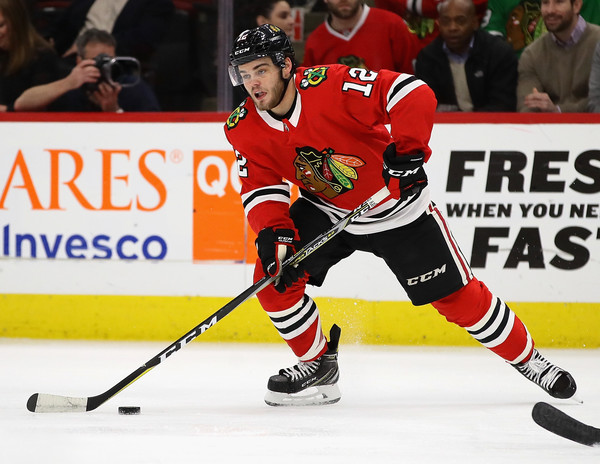 The Blackhawks have been a massive disappointment this year, even considering the rebuild that was coming with the removals of Marian Hossa and Niklas Hjalmarsson from the lineup.

Many of Stan Bowman’s bandaids – veterans buying time for kids to develop – didn’t do what the team had hoped. Cody Franson ended up in Rockford, Lance Bouma ate a roster spot that meant John Hayden and Vinnie Hinostroza were in Rockford (too long), and Tommy Wingels was a solid rental but wound up being traded because, at the end of the day, he was a rental. And Patrick Sharp’s victory lap didn’t provide much of anything to the team on the ice.

Many point to past moves the Hawks have made with the perception that, if those players were still in Chicago, the team would have somehow been a championship contender. In a vacuum, that’s great. But in context there’s more to every move. Brandon Saad’s cost control is important; he hasn’t put up the points that Artemi Panarin has, however. Teuvo Teravainen has become the offensive threat many of us thought he could be in Carolina; would he have been in Chicago after the expansion draft, however? And how could the Hawks have afforded Panarin in the first place with Bickell’s contract on the books?

There are lots of questions that are hard to answer if we focus on the past.

But looking to the future is the only way the Blackhawks can right the ship in October – and beyond.

Which begs the ten-ton question: now what?

Let’s begin our discussion talking about the forwards. Up front, the cupboard is far from empty. Chicago has four 50-point players this season: Patrick Kane and Jonathan Toews (assumed) with Nick Schmaltz and Alex DeBrincat.

Schmaltz won’t turn 23 until late-February. His 85 takeaways rank third in the NHL this season, and he’s figured out that shooting is a good thing; his shooting percentage is 18.1 this season. If the Blackhawks figure out consistent lines, there’s no reason to think he couldn’t be a 30-goal guy.

Can Schmaltz evolve into a point-per-game player? That’s what the Blackhawks lost when they traded away Panarin, who has 77 points (26 goals, 51 assists) in 79 games.

DeBrincat will be able to legally buy himself a beer one week before Christmas. At 20, he’s put to bed many of the questions about how well his size would play in the NHL – just as he did in juniors. He has scored 27 times this year while floating between the first and fourth lines. Now that the Blackhawks know he’s a potential 30-goal scorer as well, he should be locked into a top-six role next year and beyond.

Indeed, DeBrincat has scored more goals this season than Teravainen (23) and one would have to think that he would have more than 23 assists if he consistently skated with two forwards who are more inclined to shoot.

In DeBrincat, the Blackhawks have found their replacement for Teravainen.

Sikura is actually older than both Schmaltz and DeBrincat; he turns 23 on June 1. He dominated the NCAA this year (and last year), and showed that he can play at the NHL level with two assists in his first game. How he figures into the lineup next year, and what he can provide over a full regular season, will be an important factor for the Blackhawks next year.

However, if you add the potential of those three youngsters to Kane and Toews – and Saad for that matter – the Hawks have the makings of an electric top-six moving forward.

Of course, who plays on which line is as important as the potential each of the three has already displayed.

It’s important to keep in mind as well that Saad will turn 26 in late October. He could still reach 20 goals this year, which is noteworthy given how underwhelming his season has been. His shot percentage (7.8) this season is a full four points lower than any other full regular season he’s played in the NHL; luck has had something to do with his limited scoring. If he can return to shooting 11-12 percent, he’ll be back in the 25-30 goal range as well.

Those four aren’t the only forwards being counted on in the future, though. One common complaint about the Hawks’ youth movement has been the perception that it lacks size. While Saad uses his body well, there are concerns about DeBrincat, Schmaltz and Sikura being smaller players.

Victor Ejdsell will turn 23 in June and is listed at 6-4 and 211 pounds. He has only played in three games, but has shown the ability to skate and handle himself well in the NHL. He has been credited with five hits and three takeaways since joining the Hawks.

Hayden doesn’t turn 24 until Valentine’s Day and is listed at 6-3 and 223 pounds. He ranks fourth on the Blackhawks with 118 hits despite being limited to 47 games.

David Kampf turns 24 January and has been effective as a fourth line center. He’s only listed at 6-0 and 180 pounds but he has won 52.9 percent of his faceoffs since joining the Hawks; his 508 faceoffs taken ranks fourth on the team to date even though he has only played in 43 games. Having a second center able to win better than 50 percent of his faceoffs is important; it got Marcus Kruger a $3M salary.

While he doesn’t have the size of these other three, Hinostroza has no problem throwing his weight around. In 47 games, he has been credited with 26 hits and 26 takeaways and has 25 points. His speed is an element that will be important in the Hawks’ bottom-six moving forward, and he brings both offensive ability and an edge to the ice that is reminiscent of Kris Versteeg a decade ago. To date, Hinostroza has as many points as Ryan Hartman had before he was traded to Nashville in ten fewer games; the important difference is Hinostroza’s ten penalty minutes versus Hartman’s 58.

Add to this mix the possibilities with others we have seen briefly this year: Matthew Highmore, Andrew Duclair, Tanner Kero and Andreas Martinsen. Luke Johnson has had a nice season in Rockford as well.

Now the tricky part: paying them all.

Hayden, Duclair, Hinostroza and Tomas Jurco are restricted free agents this summer. Martinsen is unrestricted. On would figure that retaining Hayden and Hinostroza are priorities, but Duclair’s speed and Martinsen’s physical play are elements that will certainly intrigue – especially if they’re affordable.

The Blackhawks have options next year. And they have cap space to work with to get back into the mix for a deep playoff run. Up front, Chicago should feel good about the future.

Now about the blue line…

96 thoughts on “What’s Next For The Blackhawks?”