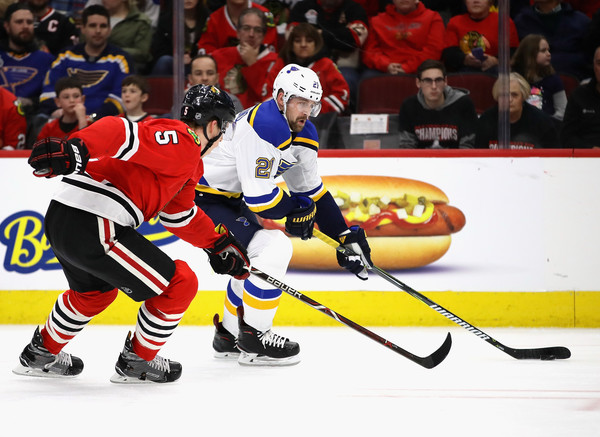 The Chicago Blackhawks made a couple significant additions on the blue line this summer. Calvin deHaan, 28, and Olli Maatta, 25, will give the Blackhawks two more shot blockers, making the Blackhawks’ back end tougher to play against – when they’re healthy. Each has dealt with serious injuries – and, in Maatta’s case, illness – in the past two years that have limited their time on the ice.

But one defenseman who stepped up his game last year will be asked to take another step forward in the coming year.

Connor Murphy, 26, was acquired before the 2017-18 season in the deal that sent Niklas Hjalmarsson to the Coyotes. He averaged 19:29 on the ice last year. Only Duncan Keith and Erik Gustafsson skated a heavier workload last season. His 2:06 per game short-handed ranked second behind only Brent Seabrook on a historically bad penalty kill unit. The additions of Maatta and deHaan should help that unit, but the role Murphy is expected to play on that special teams unit will continue to be important.

Murphy appeared in only 52 games last year but finished second on the team behind Seabrook with 119 hits. He also blocked 91 shots and was credited with 14 takeaways.

Over the course of the 2018-19 season Murphy showed continuous improvement – and received increased confidence from coach Jeremy Colliton.

Chicago’s blue line will be crowded this year. The additions of deHaan and Maatta join Keith, Seabrook, Gustafsson, Murphy, Slater Koekkoek and Carl Dahlstrom among players who saw frequent action last year. The Blackhawks also appear ready to give to prospect Adam Boqvist a long look in training camp as a potentially special puck-moving defenseman.

What makes this depth more interesting in the coming year is the contract statuses of the top seven players.

Murphy, deHaan and Maatta are all set to hit unrestricted free agency in 2022. However, the looming expansion draft with the new Seattle franchise will impact the Blackhawks somehow. Those three defensemen are making $3.85M (Murphy), $4,083,333 (Maatta) and $4.55M (deHaan), all reasonable deals for players of their potential caliber.

Gustafsson will be an unrestricted free agent next summer; Koekkoek will be a restricted free agent. Gustafsson’s $1.2M cap hit makes him one of the great bargains in the NHL, but the emergence of Boqvist could make him an asset the Blackhawks have to think twice about extending beyond this season – or keeping past the trade deadline.

Chicago has a good young pipeline coming as well. Ian Mitchell, Nicolas Beaudin, Dennis Gilbert, Lucas Carlsson and Chad Krys are all possible NHL roster players at some point in the next 2-3 years.

Murphy has now been in Chicago’s system for two seasons and has developed chemistry with the veterans on the roster. The new depth the team has will help Colliton continue to put players like Murphy in the best position to succeed. How Murphy performs in a more meaningful role will play a huge role in his future with the organization – and the hopes of a team that expects to return to the postseason.

23 thoughts on “What’s Next For Connor Murphy?”