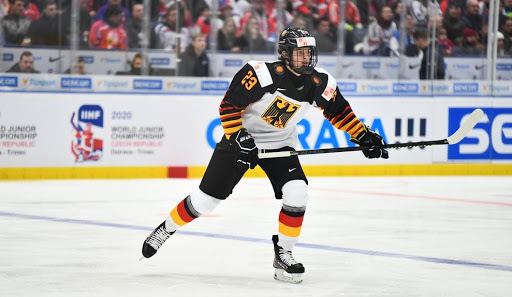 On Friday morning, Scott Powers of The Athletic offered some interesting news regarding a number of Blackhawks prospects who may be headed for contracts this offseason.

Reichel, the 17th overall selection by the Blackhawks in the 2020 NHL Draft, has had a strong season for Eisbaren Berlin and appears to be ready to join the professional ranks. He turns 19 on May 17 but would add much-needed center depth to the organization.

Galvas turns 22 on June 15 and his draft rights are set to expire on June 1. As Powers notes, Galvas’ name came up earlier this season when Stan Bowman and assistant general manager of player development Mark Eaton spoke about prospects. He’s a solid, puck-moving defenseman who would add more depth to the pipeline.

Borgström might be a big center who could be part of the Blackhawks NHL roster next year. Bowman spoke about the club’s expectation that they’ll be able to sign him when he was acquired. He’s having a nice postseason in Finland right now and could be an option for a second line center role in Chicago. He turns 24 in August.

This is your annual tease that Shalunov, now 28, will actually come to the NHL. The Blackhawks drafted him ten years ago but he’s happily played in the KHL for years. Now, it appears, he may be ready to come to Chicago. Powers reports the Hawks have spoken with his agent about signing this summer. He’s having a marvelous postseason in Russia right now, making him more tempting for the Blackhawks. However, as Powers points out, because of his age he would not be signing an entry level contract; Shalunov would have to sign a standard player contract. This could be a huge addition to the Blackhawks roster if he decides to come.

Zhafyarov, 27, was ranked the top European free agent by Corey Pronman at The Athletic recently. He scored 21 goals with 40 assists in 58 games for Nizhny Novgorod in the KHL this season. Powers writes that Shalunov and Zhafyarov may be sold to the Hawks as a package deal. From Pronman’s write-up:

“He’s a highly intelligent passer with a good mid-distance shot and individual skill. He’s small, but not soft, and has killed penalties at the KHL level. While he’s a good skater for a 5-foot-9 player, he doesn’t have a true dynamic top gear. But I think he has enough skill and effort in his game to be a bottom-six forward in the NHL.”

27 thoughts on “Which Prospects Might Join The Blackhawks This Offseason?”