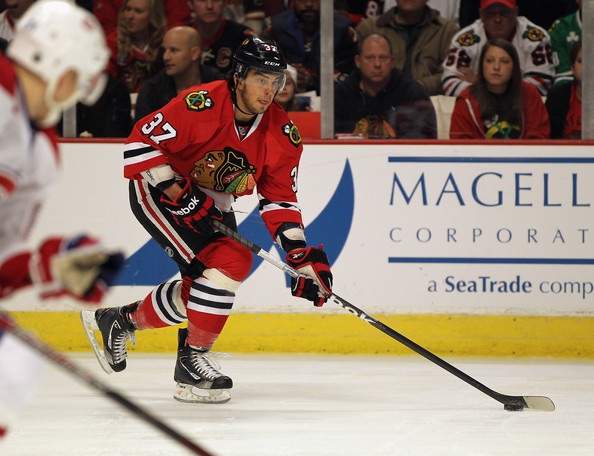 With Dave Bolland and Michael Frolik already traded out of town, the eyes of the Blackhawks organization are clearly on the future.

One of the names brought up repeatedly by GM Stan Bowman after the Cup rally in Grant Park has been Brandon Pirri, who appears to have a good chance to play a significant role on the 2013-14 Blackhawks. Pirri was selected with the 59th overall pick in the 2009 Draft (14 spots after Atlanta took Jeremy Morin) out of Georgetown of the OJHL. He spent the following season at RPI, where he posted 43 points in 39 games.

After the Blackhawks won the Cup in 2010, he was certainly on the organization’s radar. But not many expected him to be in the lineup on Opening Night when the Hawks raised their first banner in 49 years.

But, as we first reported, the Blackhawks signed the slender forward and recalled him just hours before the 2010-11 home opener; Pirri took the place of Patrick Sharp that night. Pirri didn’t register a point, and spent the rest of the 2010-11 season in Rockford. In his first season with the IceHogs, the 19-year-old center scored 12 goals and added 31 assists in 70 games.

During the 2011-12 campaign with Rockford, Pirri improved offensively with 23 goals and 33 assists in 66 AHL games. He led the IceHogs in both points (56) and assists in his second full AHL season. Pirri saw action in five NHL games that season as well, and he impacted the stat sheet in these appearances; he was credited with two assists in those five games.

Pirri’s third full season in Rockford saw him take another significant step forward. He finished the regular season as the AHL leader with 75 points and tied for the AHL lead with 53 assists in 73 games. Now 22, Pirri appears to be ready to make the jump to the NHL for more than a few games this fall.

There are some concerns about Pirri at the dot, but that’s nothing new for the Blackhawks; they just won a Stanley Cup with one center winning more than 50 percent of his draws. Listed at 6-0 and 180 pounds, Pirri is a left-handed shot who will likely get a chance to win the second line center role for the 2013-14 Blackhawks.

42 thoughts on “Who’s Next: Brandon Pirri”