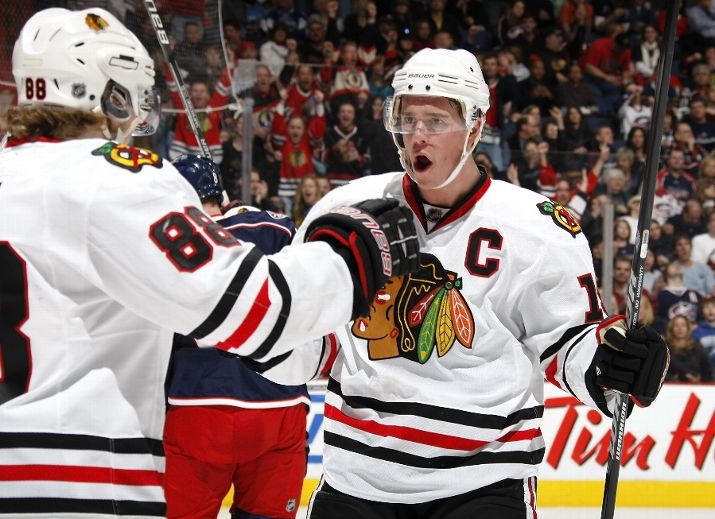 Today, in the first part of a series comparing Toews to other potential Hart finalists, we’ll look at why Toews is more valuable than either Daniel or, last year’s Hart-winner, Henrik Sedin.

First, let’s look at the obvious points of interest: scoring. Analysts that do minimal work will simply look at the league’s leading scorers and assume one of them is the league’s MVP. This is usually about as appropriate as giving baseball’s Cy Young Award to the pitcher with the most wins or strikeouts.

But, for the sake of comparison, it’s a place to start.

As you can see, this is actually an interesting breakdown. Toews averages more ice time per game than either Sedin, has fewer penalty minutes than both. In fact, he is better in every category than Henrik other than assists.

Daniel, the league’s leader with 90 points, has more power play points and more game-winning goals than Toews as well.

However, Daniel is a wing. So it’s hard to compare him to either Henrik or Toews in a critical part of the game: faceoffs. Both teams emphasize puck possession, and getting control of the puck at the dot is where that begins.

Because Daniel’s a wing, we don’t compare his faceoff percentage to either his brother or Toews. As you will see, though, Toews is vastly better than Henrik in this category as well.

There is one overwhelming difference between these three valuable players, though: defense.

While a surface-level look at plus-minus will give the naive perspective that the Sedin’s are having a good year, digging deeper provides a powerful perspective on how confident Vancouver’s coach is using his top two scorers.

Wow. Can those numbers be right?

This is perhaps the strongest case for Toews’ value to the Blackhawks being significantly more than either Sedin. All three are primary skaters on the power play, which should be expected given their production levels.

But the difference between Toews and either Sedin is that he serves as the primary center on both special teams in Chicago.

The fact that the Sedins average 14 combined seconds of short-handed ice time per game is appalling. Indeed, the Canucks rely on Ryan Kesler to play crucial defense on behalf of both Sedins, and a case can be made that he is more valuable to Vancouver’s success this year than Henrik or Daniel.

If a player is going to be named the Most Valuable Player in the NHL, he should contribute to all facets of the game. Clearly these numbers prove that Toews fills that role better than either Daniel or Henrik Sedin.

Did I mention Toews has a ring, too?