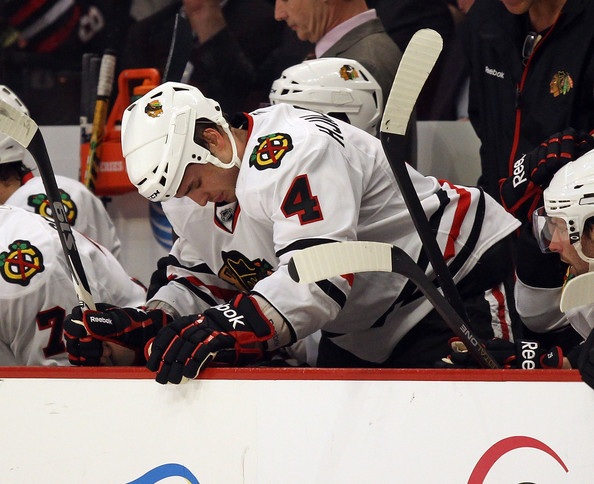 I attended the Blackhawks game against the Blue Jackets on Friday night, and it was glaringly obvious why these Blackhawks are not a playoff team.

It has nothing to do with superstars carrying the team. Heck, all three goals were scored by the money-players on the team. Patrick Sharp, Jonathan Toews and Patrick Kane are, in my opinion, the best line in hockey right now.

It has nothing to do with what players do in their spare time. Deadspin might love dragging Kane through the mud whenever a “new” photo arrives in their email, but the simple reality is that Kane is still performing. Deadspin makes TMZ look like the Wall Street Journal, so putting stock in what they report is foolish anyway.

It has nothing to do with coach Joel Quenneville missing the last two games, either. The Hawks have won half of their games with Quenneville, so splitting two games without him is consistent with the rest of the year.

This team is not a playoff team because they have no depth, and the coaches have no confidence in their roster.

At the 10 minute mark in the third period last night, I half-jokingly said to Steve and Lori (who have season tickets next to me) that the Hawks should run a rotation of six forwards and five defensemen the rest of the way.

This roster has enough high-end talent to win games. We saw that last night. But games are won and lost in the third period, and, when your best players are double-shifting for the final 30 minutes of the game, it’s hard to find an extra gear. Look at the ice time from the forwards last night:

What’s wrong with this picture? The ice time for Kopecky, Bickell and Frolik is probably pretty appropriate at this point in the year, but look at the minutes from the top lines! How can a defending champion and playoff-hopeful justify handing a uniform to a guy that’s going to skate four shifts? And if Stalberg is going to take stupid penalties and wind up in the doghouse twice a week, why isn’t he doing it in Rockford? (note: Stalberg would have to clear waivers to be demoted… I would take that chance.)

There were 67 faceoffs last night. Toews took 30 of them, and Bolland took 24.

If you’ve read this site at any point in the past you know that I have done nothing but defend every decision made by Blackhawks’ management in the last 12 months. I’m not sure I can any more.

When the 2010-11 Blackhawks roster was constructed, the house of cards was built on a foundational belief that the team had replaced the skills that had left. Stalberg, Scott, Dowell, Fernando Pisani and Jack Skille were going to step in and perform well in their new roles and reward the organization for putting faith in them as players.

Well, what we’ve seen this year is the “bad” column on every one of their scouting reports.

Stalberg has all the physical skill in the world, but appears to be clueless. He never put it together in Toronto, and hasn’t done it in Chicago, either.

Skille spent five years in Rockford for a reason: he sucks. Stalberg and Skille showed us over 50 games that neither is an NHL player right now. And Skille is now in Florida.

Scott has a big body, but should have gone into boxing instead of hockey. He can’t skate and hasn’t shown the ability to do anything with the puck. He is not an NHL hockey player.

Pisani is an outstanding defensive forward who’s a special teams ace… when healthy. Fans in Edmonton told us he wouldn’t play more than 60 games this year, and they might be right after all.

Ryan Johnson might be a faceoff ace, but there’s a good reason he was still a free agent more than a month into the season: he can’t do anything but win faceoffs. At least John Madden scored a few points last year.

These Blackhawks needed to receive exceptional performances from their role players to make a run this year, and they’ve received little more than disappointment. Now that the money is on the table, and every game means everything, we’re seeing exactly what the suits on the bench think of their roster.

After Friday night’s loss, acting-head coach Mike Haviland said, “(Columbus) started outworking us. That’s unacceptable at this time of year.” what’s also unacceptable is thinking you’re a playoff team while the coaches only trust seven forwards enough to put them on the ice for the last 10 minutes of a critical game.

This team’s roster is handicapped, and it’s killing them. With nine days to the trade deadline, we’ll see if they do anything to fix it.