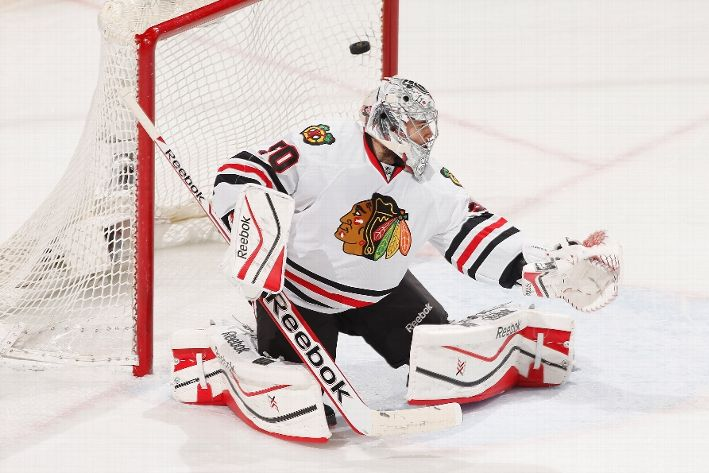 The only positive for Blackhawks fans on Friday night was the NHL (finally) announcing a start time for Sunday’s Game Five at the United Center.

Chicago went into the Xcel Energy Center and were thoroughly owned by the Minnesota Wild, losing 4-2 in their worst performance of the 2014 playoffs. Patrick Sharp and Michal Handzus scored the two goals for the Hawks, and Marian Hossa had assists on both goals. But that is the extent of the positive in the box score from this debacle.

Coach Joel Quenneville mixed up the lines to, in theory, spread out the offense but the Hawks generated nothing from three lines. The bottom line of Brandon Bollig, Joakim Nordstrom and Jeremy Morin were led by Morin’s 7:09 in the game; Bollig, who took a ridiculously dangerous and stupid boarding penalty late in the second period saw only 4:44 in the game.

Bollig wasn’t the only player to take a less-than-ideal penalty in the game, and the parade to the box caught up to the Hawks early in the third period. Trailing only 3-2 in spite of 40 mediocre minutes, Duncan Keith and Michal Rozsival each took a penalty within the first 3:30 of the final period. Minnesota scored an insurance goal while Rozsival was in the box to effectively put the game away.

Rozsival had a bad night, but he was far from alone in that regard. He skated 16:23 in the game and led the team with two hits, but struggled to handle the puck all night.

Marcus Kruger led the team with three shots on net and 3:54 in short-handed ice time, and was almost collateral damage after Bollig boarded Keith Ballard. Jared Spurgeon extended both an elbow (towards Kruger’s head) and a knee at Kruger on the power play resulting from the Bollig penalty, and Kruger left the ice in pain. Thankfully, he did return for the third period.

Patrick Kane blocked as many shots – two – as he put on net in the game, tying for the team-high with Duncan Keith and Brent Seabrook. Jonathan Toews played 23:22 in the game and was the only Hawks player to win more than 50 percent of his faceoffs; Toews won 15 of 29 in the game.

For Minnesota, Justin Fontaine started the scoring in the first period and Jason Pominville gave the Wild the lead back early in the second. Nino Niederreiter scored the game-winner less than one minute after Handzus tied the game, and Spurgeon added the power play goal in the third to close the books.

Corey Crawford had his worst night of the postseason, allowing four goals against 31 shots in the loss. Ilya Bryzgalov, who started the game as shaky as Crawford, settled down after the Hawks’ second goal and played a strong third period. Bryzgalov faced only 20 shots in the game, with two getting past him.

The Blackhawks have been held to 22 or fewer shots only eight times in 85 playoff games since 2003, and four of those have come in this series.

Sunday night’s game is scheduled for 8:00 pm CT at the United Center.