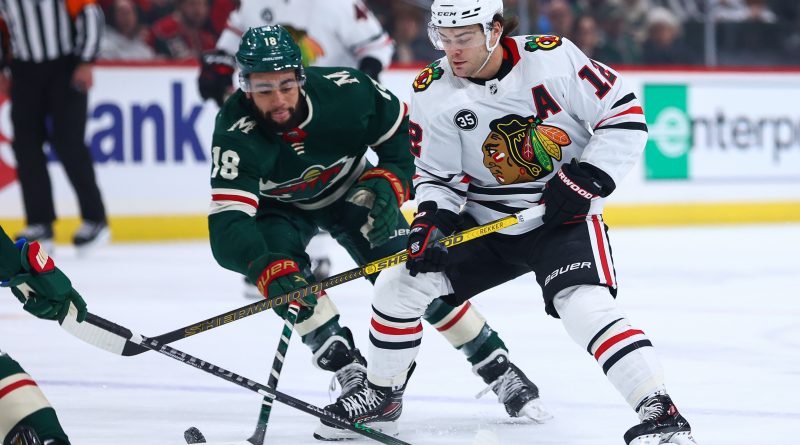 The clock continues to tick toward the trade deadline, but the Chicago Blackhawks had a game on the calendar on Saturday afternoon in Minnesota. Brandon Hagel wasn’t there, but Taylor Raddysh and Boris Katchouk were in the lineup — as two of the 11 forwards who dressed for Chicago.

Kevin Lankinen got the nod in net as the Blackhawks continue considering their trade options for another one of their netminders. Alex Vlasic made his NHL debut for the Hawks as well.

As has been the trend for most of this season when the Hawks play good teams, shots from Blackhawks reaching the net were hard to come by. Frederick Gaudreau’s ninth of the year late in the first period gave the Wild a 1-0 lead. Minnesota out-shot the Hawks 11-7 in the opening 20 minutes. Both teams had an unsuccessful power play in the first.

Minnesota out-shot the Hawks 12-7 in a second period that was spent completely at full strength for both sides. Lankinen was doing well to keep his team in the game.

Almost nine minutes into the third period, Patrick Kane reminded us that he’s a special talent. He set up Seth Jones for the tying goal.

Unfortunately, that was the end of the offense for Chicago. Ryan Hartman scored into a wide open net almost eight minutes after the Jones goal to give the Wild a lead. Chicago pulled Lankinen for the extra attacker with almost three minutes left in regulation but could barely get the puck into their offensive zone. The Wild added an empty net goal with six seconds left in the game to make the final score 3-1.

In his debut, Vlasic skated 6:03 with one blocked shot. We’ll see if there are seven defensemen on the ice on Sunday, and if he’s one of them.

Lankinen was really good, stopping 31 of 33 in the game.

Dylan Strome won 10 of 13 faceoffs. Jonathan Toews won 13 of 21. Neither was credited with a shot on net, however.

40 thoughts on “Wild Too Much For Short-Handed Blackhawks”