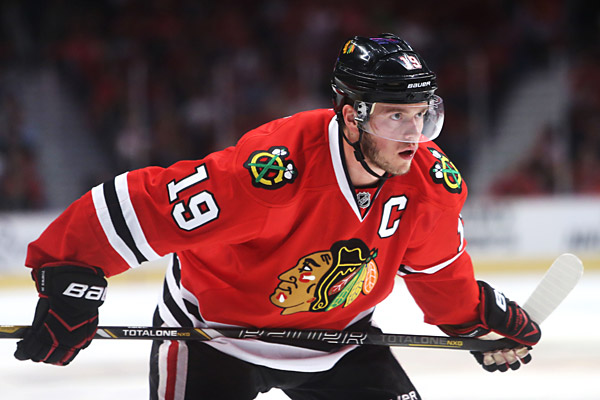 Heading into the 2015 Stanley Cup Final, the Blackhawks and Lightning have taken two different paths to the final round. But both teams have received strong play from their centers, leading to their places in the season’s ultimate series.

In these playoffs, the Blackhawks have faced three teams that bring a lot of size to the faceoff circle, certainly more than the Lightning will present in the upcoming series.

Here are the Blackhawks three previous playoff opponents’ centers listed with their heights and weights (listed in order of most faceoffs taken during the 2015 playoffs):

The Wild finished the regular season ranked 15th in the NHL at the dot, but the Blackhawks completely dominated them in the series. Vermette again led the way, winning 71.4 percent of his faceoffs, but he wasn’t alone. Andrew Shaw won 66.7 percent of his limited faceoffs and Toews won 56.1 percent of his heavy workload. Marcus Kruger also came in above 51 percent for the series, with Richards (36.7 percent) being the lone center to struggle in the Hawks second round victory.

There aren’t many teams that are bigger at the dot than the Ducks, and Anaheim was the better team when the puck was dropped in the last round; only Toews (58.5) was above 48 percent against the Ducks in seven games. Anaheim finished the regular season ranked ninth in the NHL and did a great job of winning faceoffs throughout the series, which was a key contributor to their success offensively.

As Chicago looks ahead to the Stanley Cup Final, Tampa Bay presents a different challenge. There isn’t as much size at the dot, but the Bolts have been successful in the playoffs.

Both teams have been offensively led by their centers as well. Johnson leads all postseason skaters with 12 goals and 21 points, and Stamkos has added 17 points in 20 games. Toews has, predictably, been Chicago’s biggest weapon at center; he has nine goals and 19 points in 17 games.

The team that wins at the dot will likely win the Stanley Cup. And, after their path through Nashville, Minnesota and Anaheim, the Hawks will have a distinct advantage heading into the coming series. 24 thoughts on “Winning The Dot: Blackhawks Advantage Up The Middle”