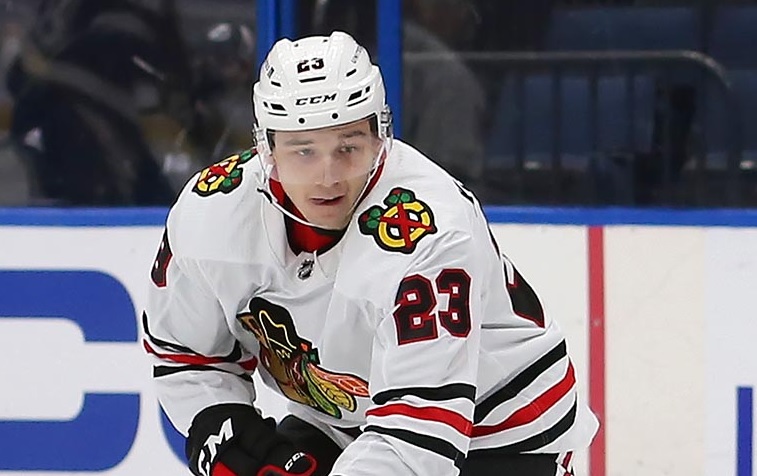 Don’t look now, but the Chicago Blackhawks are (gulp) in a position to be an interesting team this season.

With some of their veteran players (and a couple younger ones) missing from the lineup in COVID Protocol, the Hawks have found a groove. Chicago has won four of their last five – including a two-game sweet in Dallas – and have points in 10 of their last 11 games.

All while players have been missing from the theoretical rotation because of COVID.

And while they were missing, other players have emerged.

Veteran forwards Lucas Wallmark and Ryan Carpenter remain in the league’s COVID protocols. With them missing from action, a few young forwards have also stepped up.

Philipp Kurashev spent some time as the first line center but has also skated well at wing. He has five points in the Hawks’ last five games and could be a potential power play piece if Colliton looks to add him to one of those units.

Brandon Hagel had the assist on Tuesday night’s game-winning goal and has been a terrific energy player. He may have taken Matthew Highmore’s job away on the fourth line.

But with the Hawks rolling four solid lines without Wallmark and Carpenter, how does Colliton re-insert them into the lineup? What’s the old saying about not f***ing with a winning streak?

Indeed, if the Blackhawks are retooling/rebuilding, it would make sense to leave the younger forwards in the lineup, right?

Wallmark, 25, at least has youth on his side. But which forward are you taking out of the lineup to make room for him? He is a restricted free agent at the end of the 2021 season so he’s a pure rental if the youngsters who have stepped up continue to play well.

Carpenter, 30, has one more year after the 2021 season on his contract with a $1 million cap hit. A solid defensive player who helps the Hawks on the penalty kill, he has value to the Blackhawks. But is he necessary? Or would a team that is struggling to play defense (stares at Vancouver) be interested in a veteran center to solidify their bottom six?

Unfortunately, David Kampf is the only center on the roster regularly winnings faceoffs; he leads the team at 55.1 percent. Carl Soderberg has stepped into the center mix effectively and Carpenter, who can play center, has been bumped to a wing. Pius Suter and Kurashev have done well at center in a top-six role as well. And Dylan Strome is a necessity as a top-six center while Jonathan Toews and Kirby Dach are away from the team.

Right now, if the Blackhawks put their best 12 forwards on the ice, we have to openly question if either Wallmark or Carpenter is part of that group? If not, why keep them on the roster?

The taxi squad is an option. Reese Johnson, who also looked good when given a chance, and Highmore appear to be set there for a while. Brandon Pirri has already cleared waivers (read: nobody else wants him) so his trade value is doubtful. Do you keep five forwards on your taxi squad? Unlikely.

On the blue line, Adam Boqvist was released from the COVID Protocol list but, having actually had it, needs to get his legs back under him.

Nicolas Beaudin and Ian Mitchell continue to show they’re ready for the bright lights of the NHL. Coach Jeremy Colliton has continued to put the two young defensemen into critical situations and they have performed well.

With Connor Murphy missing Tuesday night’s game with a hip, the Hawks still had enough depth to roll seven defensemen and come out with a victory. Boqvist was not one of those seven.

While we aren’t openly advocating for Boqvist to be traded, one has to wonder given his inconsistent play at the NHL level if he wouldn’t benefit from some additional ice time in Rockford at this point. It’s clear that Mitchell and Beaudin are becoming increasingly comfortable with each passing game and it’s going to be hard to take them out of the rotation, even for a night.

Lucas Carlsson and Madison Bowey will likely be on the taxi squad for a while. Anton Lindholm is also presently on the Hawks’ taxi squad. And that role makes no sense for Boqvist. With Duncan Keith, Calvin de Haan, Nikita Zadorov and Murphy providing veteran leadership, there are simply too many bodies on the blue line for Colliton.

If Murphy needs to miss time, that obviously opens a spot for Boqvist. And the Blackhawks will certainly need to keep the expansion draft in mind if they decide to begin parting ways with veteran players.

But this team is playing well as it is currently constructed. The Blackhawks could be sellers out of an abundance of players, not because they’re playing poorly. Who would have thought that would be the case six weeks ago?

43 thoughts on “With Blackhawks Rolling, Is It Time To Trade?”